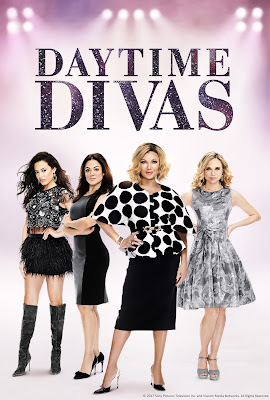 Daily fireworks light up between the five female co-hosts of The Lunch Hour long-running talk show in the all new drama Daytime Divas which premieres this July on Sony Channel.
Show creator and host Maxine Robinson (Vanessa Williams), raunchy comedienne Mo Evans (Tichina Arnold), outspoken conservative Heather Flynn-Kellogg (Fiona Gubelmann), former child star Kibby Ainsley (Chloe Bridges), and Pulitzer Prize-winning investigative journalist Nina Sandoval (Camille Guaty) gather around the table to discuss life, love, politics, and juicy gossip.
Maxine is used to calling the shots, always getting the last word in every give-and-take banter her panel delves into. But in the fascinating world of daytime television, nothing is what it seems.

Onscreen, they are best friends with five different points of view, but behind the scenes, they inhabit a backstage world filled with intrigues and scandals, sparking a power struggle that casts a doubt on their show’s future.

Daytime Divas premieres on July 11, every Wednesday at 8:50pm, first and exclusive on Sony Channel.

Sony Channel is the premier destination for female-skewing entertainment with the biggest and best of Hollywood. Designed for the socially connected viewer, Sony Channel features some of the most captivating and talked-about drama, comedy, lifestyle, and reality programs on TV, all airing close to the U.S. telecasts, together with popular feel-good movies.
Fresh, confident and stylish, with a dash of clever wit, Sony Channel is visually stunning with a brand identity that perfectly complements its line-up of high calibre programming. Sony Channel appeals to a female-skewed, male-inclusive audience who loves to escape, engage, and lose themselves in premium content. Viewers are modern, social, stylish, and aspirational.
Sony Channel is wholly owned by Sony Pictures Entertainment and managed by Sony Pictures Television Networks Asia, which also operates pay-TV channels AXN, Animax, ONE and GEM.
See www.SonyChannelAsia.com, and join the conversation on www.facebook.com/SonyChannelPH and https://twitter.com/SonyChannelPH for more.