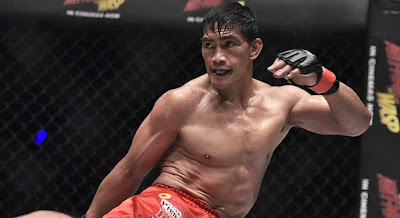 The journey to becoming a World Champion has been a memorable one for Eduard Folayang.
Folayang, a former two-time ONE Lightweight World Champion, looks to start off 2020 with a bang when he faces Pieter Buist at ONE: FIRE & FURY on January 31 from the Mall of Asia Arena in Manila, Philippines.
For the veteran leader of Team Lakay, overcoming a difficult 2019 has only made him stronger and hungrier to climb back up the ladder this year.
“The best thing about martial arts is that we have learned that it is the process for us to be a better human being,” Folayang said.
“I always strive to be a better martial artist. Setbacks help make us stronger to overcome more difficult challenges in life.”
The 35-year-old native of Baguio City got back into the win column this past November when he scored a technical decision over Amarsanaa Tsogookhuu at ONE: MASTERS OF FATE.
Folayang’s victory came on the heels of back-to-back submission defeats at the hands of former UFC Lightweight World Champion Eddie Alvarez and fellow former two-time ONE Lightweight World Champion Shinya Aoki.
“It was very challenging,” Folayang said.
“I lost both via submission, so that was definitely tough (but) that is life. The first one was just a single mistake. That loss to Shinya was because of a single mistake.
“Then, the next one was against Eddie Alvarez. I almost won, but it slipped away.”
While all defeats can be tough to overcome mentally, the setback for Folayang against Alvarez was a little more difficult.
“It hurt the most because I prepared well for that one,” he said. “But life must go on.”
Folayang has worked hard to make himself a better athlete through the battles. After a 2014 loss to Timofey Nastyukhin, he reeled off four consecutive wins, including a 2016 third round finish of Aoki to win the ONE World Title for the first time.
In 2017, Folayang secured his first title defense with a five-round decision over Ev Ting. He lost the belt to Martin Nguyen later that year, but again rebounded, winning three in a row including a decision over Amir Khan for the vacant belt.
Now, with the win over Tsogookhuu on his resume, “Landslide” will look to make it two in a row against Buist.
“I need to win my next fights,” he said. “I need to be in shape. I need to reclaim what I have lost.
“If I become the World Champion for the third time, it will prove something to myself. There will be no doubt about my achievements. That is my aim.”
Posted by Boy Raket at 12:00 PM