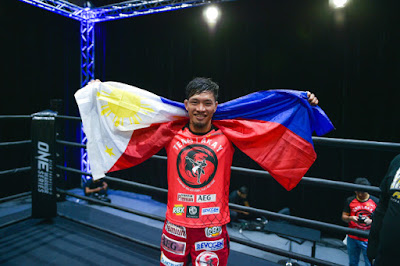 A tremendous opportunity awaits rising superstar Lito Adiwang at ONE: FIRE & FURY.
The Team Lakay standout will put his six-bout win streak on the line against Pongsiri Mitsatit on January 31 from inside the Mall of Asia Arena in Manila, Philippines.
Following his run through Rich Franklin’s ONE Warrior Series, Adiwang finds himself in prime position to begin the year strong after securing a finish at ONE: CENTURY last October.
“I feel confident heading into this match up,” Adiwang said. “I love Pongsiri’s style. He’s an exciting fighter. It just gives me more motivation and confidence knowing I am up against a good challenge.
“The fact that my teammates are also on the card with me, it is even more special.”
A distinct Team Lakay flavor will be present, as Joshua Pacio defends his ONE Strawweight World Championship against Alex Silva. Eduard Folayang, a former two-time ONE Lightweight World Champion, is also scheduled for action along with Danny Kingad. Pacio, Folayang and Kingad are all teammates of Adiwang.
The bout serves as a special one for many reasons for Adiwang, including because of the location. He has not competed on home soil since 2013.
“This is my first fight in Manila with ONE Championship, so naturally, I am really excited to fight in front of my countrymen,” he said. “Filipino fans are the best in the world, and I cannot wait to bring the heat.”
Adiwang has done just that since joining the promotion in 2018, earning three first round finishes among his four bouts. Along with besting Pancrase Flyweight World Champion Senzo Ikeda in the opening two minutes of their battle, he also holds stoppage wins over Alberto Correia and Jose Manuel Huerta to go with a decision against Anthony Do.
Known as “Thunder Kid,” Adiwang hopes to make an impression against Mitsatit. Through his preparation for the bout, he believes there is a potential spot to exploit against “The Smiling Assassin” from Tiger Muay Thai.
“Pongsiri is a great striker,” Adiwang said. “He is good in the clinch and he has powerful knees. I know his Muay Thai will be exceptional, but I think I see weakness in his ground game.
“I am heading into this fight full of confidence. I know I am going to win. That is my mindset right now. The only thing left to do is perform to the best of my abilities. Then, I will claim victory.”
Over his 10 career victories, Adiwang has secured six knockout wins and three more submission triumphs. His plans for Mitsatit include earning another stoppage by any means necessary.
“I want to win this fight in an impressive way,” he said. “I want the finish, whichever way it comes - on the feet or on the ground.”
Posted by Boy Raket at 12:30 PM