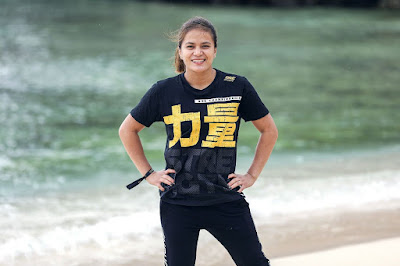 It's been a year and a half now since Gina "Conviction" Iniong last stepped inside the ONE Circle.

Since then, a lot has happened in her life -- and that's not even counting the struggles brought upon by the COVID-19 pandemic to everyone around the world.Iniong, a gold medalist in kickboxing in the 30th Southeast Asian Games back in 2019, has seen a lot of things happen in her life. She first married her partner Richard Araos last year, and just two months later, gave birth to their first child, a baby daughter that gave her a new perspective in life."I concentrated on my family life. I got married and I had been blessed with a baby girl, so I have been dedicating my time taking good care of her," she said.It's truly a life-changing experience for the 32-year-old, but despite the new shifts she currently faces, there's one thing that hasn't left her system: that itch to fight.That's understandable given the tear she's had before the pandemic, where she won three of her last four fights.Before her gold medal triumph in the SEA Games, Iniong earned a split decision win over "Shadowcat" Hayatun Jihin Radzuan of Malaysia at ONE: Clash of Legends in February 2019, before following it up with a superb unanimous decision victory over "Knockout Queen" Asha Roka of India at ONE: Fire & Fury in January 2020.Her performance in those last two fights allowed her to move up to no. 5 in ONE's women's atomweight rankings before her inactivity bumped her off of the list.That's why there's no denying the fire lit under Iniong as she seeks to get back to action soon, especially after seeing her stablemates in the famed Team Lakay Gym fight in recent fight cards.However, she also knows that getting back to her old deadly shape takes time, embracing the process she needs to undergo under the watch of coach Mark Sangiao."I've been out for a while so I need some time to get back in fight form. As of now I'm taking it one day at a time. I want to be fully prepared when I come back," she said.For now, though, she's happy to pick her spots and take her time to scout the competition, all the more with ONE Championship's women's atomweight division as deep and more competitive than ever.Among the participants in the ONE Women's Atomweight Grand Prix include no. 1-ranked Denice "The Menace" Zamboanga of the Philippines, no. 2 Meng Bo of China, no. 3 Alyona Rassohyna of Ukraine, no. 4 Stamp Fairtex of Thailand, no. 5 "Arale Chan" Seo Hee Ham of Korea, as well as Itsuki "Strong Heart Fighter" Hirata of Japan and Alyse "Lil' Savage" Anderson of the United States."I'm excited to see all the best atomweights compete with each other. I'm also amazed at how the division has grown," Iniong said.It's easy to feel envious knowing the caliber of competition Iniong is missing out for not being a part of the ONE Women's Atomweight Grand Prix. But it also serves as a fuel for her knowing fully that anyone of those women could be her next foe once she marks her comeback."I don't really have anyone in particular that I have my eye on, but of course, I want to stay ready for anyone that will be put against me," she said.And it also includes reigning ONE Women's Atomweight World Champion "Unstoppable" Angela Lee of Singapore, who herself is currently dealing with her own pregnancy.Having these prospects in mind only serves as motivation for Iniong to continue working on her craft while also juggling her role as a mother.Nonetheless, there's only one thing Iniong wants to accomplish when she finally steps back into the spotlight."I am a better Gina Iniong. I am now focusing on being more mentally tough and getting back in fight shape and condition," she said, ever grateful for the support Team Lakay has given her."The team has been there for me ever since. We are a family and even during my pregnancy and motherhood, coach Mark and the team never stopped supporting me. They are always one call or a message away and that inspires me to continue fighting and performing for our team."
Posted by Boy Raket at 11:30 AM