Nick Vujicic for the Second Time here in the Philippines!

Nicholas James “Nick” Vujicic (/ˈvujitʃitʃ/ voo-yee-cheech; Serbian pronunciation: [ʋûjitʃitɕ]); born 4 December 1982) is an Australian Christian evangelist and motivational speaker born with Phocomelia, a rare disorder characterised by the absence of legs and arms. As a child, he struggled mentally and emotionally as well as physically, but eventually came to terms with his disability.

As expected, his visit here is not only very inspirational and revealing as well. Talking about "Limitless Possibilities" as he is the living testament of the phrase. He gave his life story and how he became the known personality that he is even before his popularity spread online. 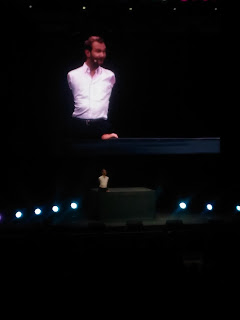 Unexpectedly, his sign of being a motivational speaker didn't came from his parents  but from his his own high school, a 61-year-old janitor from India named Arnold that told him, “Nick, you’re gonna be a speaker. You need to speak to the students at lunch. You have a story to tell.”, and after 3 hours of debating about whether he can do it or not he finally got convinced that he can do it and so he started with a few students at school when he was younger until he grown up and started to call colleges and universities to speak for them. He told all the possible failures that someone like him had encountered when he was starting and how he became successful. Today, Nick gets about 100 invitations a week and has received 35,000 invitations to date. And so Nick Araneta: “If you fail, are you a failure? How many times are you willing to try? Is it okay to fail? Does everyone fail? Is it okay to try again?


Not like everyone taught that he had all the support from the government but he didn't, he worked hard for it and eventually got a scholarship out from his perseverance. His life story is definitely not all about success but rather the opposite, he failed and failed so many times that he became tougher as a person as his faith as equally strong, his desire to have arms and legs that he almost committed suicide in the process but he didn't gave up. There are so many challenges in life that we think we cannot overcome but hey aren't we still trying and surviving in the process. His presence alone is already encouraging so much more on the lessons he impart that day. I can't discuss all as good as he does but I are some phrases that I think had a big impact in me:

If you're not happy single, you won't be happy married


Today is a day closer to my goal


In everything you do, do it with Love

and one that he's father told him: “You may lack limbs, but don't let that define what you can or can't do.”

By the end of the talk, the audience got a chance to ask questions to Nick via sms and relayed by Francis Kong


*This experience is made possible with the sponsorship of LIGHT NETWORK Channel 33, Magaan Dito Kaibigan "
www.lightnetwork.ph
www.facebook.com/LightNetwork