HEROES OF THE WORLD. Adriano Moraes of Brazil was crowned the interim ONE Flyweight World Champion 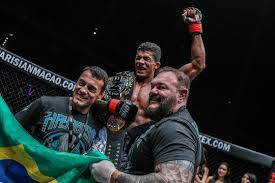 The largest sports media property in Asian history, ONE Championship™ (ONE), treated fans in Macao to a thrilling evening of world-class mixed martial arts action. The Venetian Macao’s glitzy Cotai Arena played host to ONE: HEROES OF THE WORLD, which featured the absolute best in local and international MMA talent. In the main event, Adriano Moraes was crowned the interim ONE Flyweight World Champion with a submission victory over Tilek Batyrov.

In the main event of the evening, Adriano “Mikinho” Moraes of Brazil defeated Kyrgyzstan’s Tilek Batyrov by submission to capture the interim ONE Flyweight World Championship. Batyrov owned a slight advantage in the striking battle for the majority of the bout, but on the ground it was all Moraes as the Brazilian spun a web of crafty grappling to dominate Batyrov. In the second round, Moraes was finally able to lock in a deep rear naked choke to force the tap.

Eduard “Landslide” Folayang of Baguio City, Philippines braved through an extremely durable Adrian “The Hunter” Pang, putting together one of his best performances to date. Folayang attacked his opponent with a variety of spinning back fists, wushu side kicks and sharp elbows to stop Pang in his tracks on multiple occasions. As Pang continued to stalk forward, Folayang willingly poured on various combinations. In the end, all three judges saw the bout in favor of the Filipino MMA stalwart.

Filipino mixed martial arts veteran Honorio “The Rock” Banario gave the performance of a lifetime with a thorough decision victory over Evolve MMA lightweight standout Eddie “The Magician” Ng. For three rounds Banario fought intelligently, tagging Ng with lightning quick strikes from his world-class wushu stance. Banario also once again put his improved grappling on display in a tight ground war with Ng. Ng started the bout off fast in his usual aggressiveness, but Banario kept his composure and was able to come away with the comprehensive win.

Martin “The Situ-Asian” Nguyen of Sydney, Australia shocked the Asian MMA world with an impeccable submission victory over 18-year old Christian “The Warrior” Lee. Nguyen owned the advantage in the striking department, landing a handful of well-time overhand punches. A left hand counter dropped Lee before Nguyen grabbed a hold of his neck in a guillotine choke. Nguyen dragged Lee to the canvas where he put his younger foe to sleep with Lee refusing to tap out.

Alexandre “Bebezao” Machado of Rio de Janeiro, Brazil and Alain “The Panther” Ngalani of Hong Kong brought the crowd up to their feet with an action-packed clash of colossal heavyweights. Machado was rocked by a Ngalani combination in round one, but was able to recover when the fight went to the ground. In the second round, an exhausted Ngalani struggled to find the strength to continue, tapping to a volley of strikes from top position by Machado.

In a tremendous battle of will, undefeated female atomweight Istela Nunes of Brazil impressed in a successful ONE Championship debut with a victory over former world title challenger Mei Yamaguchi. Nunes overcame Yamaguchi’s power and aggression by smothering the Japanese fighter in close range. The fight was close for three whole rounds as Nunes earned a razor-thin split decision.

Ma Jia Wen proved to be a complete offensive force, showcasing his wrestling and striking skills in a comprehensive technical knockout victory over the Philippines’ Jimmy Yabo. Yabo was a live challenger for the first two rounds but faded late in the bout, succumbing to Ma’s constant pressure. After taking Yabo down in the third, Ma finished off the Filipino with ground-and-pound.

Chinese bantamweight Ma Hao Bin overcame a spirited effort from Cambodia’s Chan Rothana, winning by three-round unanimous decision. Rothana owned a striking edge throughout the contest, but Ma was able to earn the judges’ nod in a very close fight by utilizing his world-class wrestling. All three judges saw the bout in favor of Ma Hao Bin.

Team Lakay’s strawweight prospect Joshua Pacio opened up ONE: HEROES OF THE WORLD with an impressive display of grappling skill by defeating Thai fighter Kritsada Kongsrichai in the first round by rear naked choke. Kongsrichai dominated the striking exchanges in the early going but as soon as Pacio got the takedown, he worked straight into a submission and forced the tap.

Official results for ONE: HEROES OF THE WORLD

In case you missed the action log on towww.onefc.com/livestream for the full replay of the fights at only US $9.99.

ONE Championship is the largest sports media property in Asian history. Headquartered in Singapore, the world’s most exciting mixed martial arts organization hosts the largest sports entertainment events across Asia featuring the best Asian mixed martial artists and world champions, all signed to exclusive contracts, on the largest media broadcast in Asia. ONE Championship is broadcast to over 1 billion viewers across 118+ countries around the world with some of the largest global broadcasters, including FOX Sports, Setanta, MNC, Astro, Thairath TV, ABS-CBN, TV5, Physique TV, MYTV, HTV, Esporte Interativo and more.