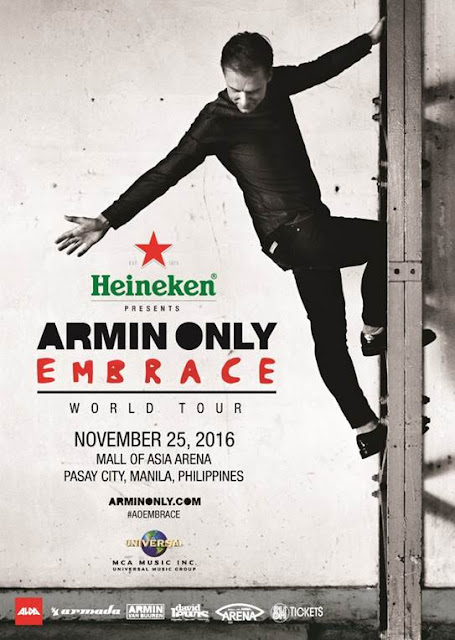 Armin Van Buuren is coming back for more!

After the huge success of Armin Only Intense Manila, Armin is back in Armin Only Embrace!

Armin Only Embrace is a 5-hour-long experience in which worlds are linked by live performances, dance acts, visuals, special effects and, above all, by the 5 times No.1 DJ in the world, Armin van Buuren. Together with his team, the DJ brings a next-level experience to the world, something that is completely new to the dance scene. He will end the night with a special vinyl hour.

Armin Only Embrace is the biggest thing Armin has ever done.

"A show like this has never been shown before,' says Armin Van Buuren. ’The rehearsal process for this show lasted three weeks. This is the first time people will experience such a trance event, its unique’.  You can compare it with a large-scale rock show, but with four hours of non-stop dance music.”

'Armin Only Embrace' focuses on Armin’s sixth and most recent studio album 'Embrace'. The legendary DJ’s spectacular show is also special in that it features different music styles. Artists and bands including Kensington, Mr. Probz, Eric Vloeimans and Cimo Fränkel are part of the tour. Armin’s world tour had a sensational kick-off on 6 and 7 May 2016 in a sold-out Ziggo Dome in Amsterdam.

Presented by Heineken® and produced by MCA Music.

Tickets for the Armin Only Embrace are available at SM Tickets. Call 470-2222 or visit  www.smtickets.com


*This is Press Release
Posted by Boy Raket at 8:17 AM