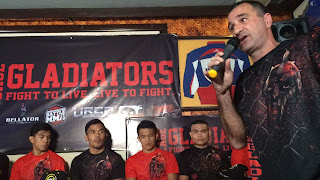 A brainchild of former fighter and soldier-turned-businessman Laurence Canavan, Cage Gladiators is a non-profit organization aiming to “empower and help Filipino fighters who have the heart and courage to put themselves on the line for pride and8 glory.”

“Filipinos are natural-born fighters, born with indomitable spirit and a courageous heart and willing to work hard to achieve their dreams,” Canavan said.


Cage Gladiators, he added, is also open to “help all the brave but impoverished Filipino fighters climb out of underprivileged and humble beginnings and make a better life for themselves through sponsored training and basic education of the business side of MMA in order for them to have a better chance of a brighter future after their career.”

Initially, nine Pinoy warriors campaigning in major MMA organizations have been initially taken under the wings by Cage Gladiators, which will complement the program with a fearsome website designed to be the central hub of MMA here.


“We’re training with our own teams (right now) but (in the future) we can train together and build a strong team here in the Philippines,” said Eric Kelly. “In the States, they cross-train; everybody there meets at the gym. I wish Cage Gladiators will make one gym here in Manila or in Baguio so we can train together.