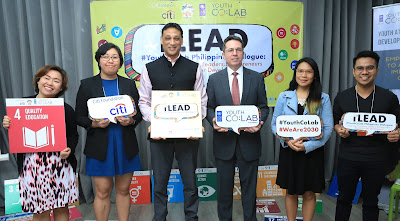 A regional program that targets social challenges and unemployment by harnessing youth leadership, entrepreneurship and innovation was launched by the United Nations
Development Programme (UNDP) in partnership with Citi Foundation.


The global youth unemployment rate is currently over 13 percent*, that is about 71 million young people, aged 15 to 24, are unemployed worldwide and about half of these live in Asia Pacific.


In addition, the Global Youth Survey 2017: Economic Prospects & Expectations study commissioned by Citi Foundation found that of the 7,000 respondents polled, 69% had dreams of starting their own business but only 44% were trying to do so, citing a lack of education and skills and concerns of failure.


The survey polled respondents across 45 cities worldwide. A majority of 78% also agreed that apprenticeships and internships were critical to future success but 60% did not feel that there were enough of such opportunities in their cities.


Targeted at helping young people overcome some of these challenges, the Youth Co:Lab program will convene a series of National Dialogues and Social Innovation Challenges across Asia-Pacific that will culminate in a Regional Summit to be held in Bangkok in March 2018.


The National Dialogues serve as platforms for young people to directly engage policy makers, private sector partners including incubators, youth-led organizations, NGOs and academia, on how to develop and accelerate youth-led entrepreneurship and social innovation.


Alongside the National Dialogues, the Social Innovation Challenges, akin to start-up
hackathons, enable participating youth to showcase their proposed ideas and solutions to tackle some of the world’s biggest social challenges.


Through these platforms, young entrepreneurs will connect with governments, mentors, incubators, and investors who will help equip them with entrepreneurial capabilities and skills. This includes mentoring and networking opportunities as well as support to start and accelerate their social enterprises.


UNDP and Citi Foundation launch their partnership during the Youth Co:Lab National
Dialogue: Inspiring Innovators, Leaders, Entrepreneurs and Actors for Development (i2 LEAD), held at Makati City. The two-day Dialogue brings together some 100 delegates including government officials, private sector participants, academia and youth representatives to identify challenges and solutions to improve the support and ecosystem for youth entrepreneurship in the Philippines.


Speaking at the launch, Jim McCue, Citi Shared Services Asia Pacific/Japan Head and Risk Shared Services Manila Head said, “We are proud to be partnering with UNDP to empower young people to take control of their future. Youth Co:Lab is part of Citi and the Citi Foundation’s Pathways to Progress** initiative to prepare urban youth to thrive in today's economy. We are doing our part by collaborating with municipal and community leaders in cities around the world to tackle youth unemployment. In addition, I firmly believe that empowering young people to lead through entrepreneurship and social innovation is a critical part of the solution.”


Statistics show many Asia Pacific countries are experiencing a “youth bulge” with adolescents and young adults making up a third of the population. In the Philippines, the median age of its population is 24.2 years and 32% of the 103.5 million population is under 15. It has the third youngest population in the ASEAN after Laos and Cambodia.


“The youth of the Philippines’ not only have a stake in the country’s development trajectory but can also play a critical role in shaping that trajectory. The challenge is to harness the creativity and dynamism of the young and align these to tackling some of the country’s most significant development challenges. UNDP is delighted to work with Citi Foundation in providing a platform to enable youth-led social enterprises to contribute to the achievement of the SDGs in the Philippines,” UNDP Philippines Country Director Titon Mitra said


“We hope to catalyse youth innovations, provide young entrepreneurs with better access to market information and business skills, and with government, provide a better enabling environment for youth-led enterprises. With Citi Foundation, we hope to inspire young innovators, leaders and entrepreneurs to become influential and successful actors for development.” 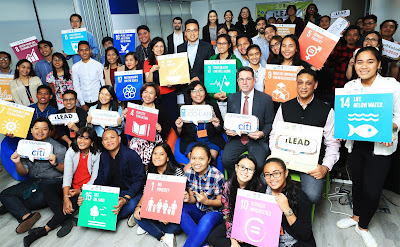 UNDP and Citi Foundation, alongside local network partners, are pioneering the National Dialogue & Social Innovation Challenge in various countries in Asia Pacific. In its inaugural year, key countries including Thailand, Philippines and China are being piloted and plans are already underway to scale up the Youth Co:Lab program across the region next year.


For updates, follow #YouthCoLab on social media, and visit the Youth Co:Lab Facebook.
Posted by Boy Raket at 9:00 AM