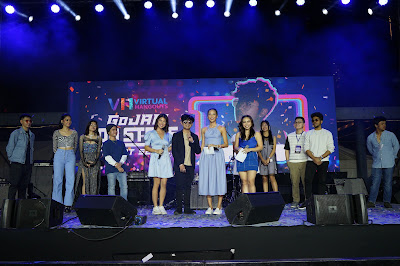 jo3m went home that night not just with the top prize and bragging rights, but with a recording contract from newly-launched entertainment company Kroma Entertainment and industry recognition that puts him on the path to success.

Over the course of a few weeks, participants actively participated in the GoJAM On Stage Talent Search’s masterclasses from the comfort of their homes on the interactive passion portal, Globe Prepaid Virtual Hangouts.

“The idea behind Globe Prepaid Virtual Hangouts GoJAM On Stage Talent Search is to leverage the power of digital technology to give our young people more opportunities to express themselves and unlock their musical talent as they connect with others who share their passion. On Globe Prepaid’s Virtual Hangouts interactive platform, we hosted masterclasses accessible through our online passion portals, led by big names in the music industry. These are designed to nurture homegrown talents and give them an avenue to grow and #OwnTheFuture,” said Givielle Florida, Head of Globe Prepaid.

The workshop recently culminated in a live musical showdown at the Bonifacio High Street Central Amphitheater which was streamed via Globe’s Facebook page and Globe Prepaid Virtual Hangouts passion portal and made more exciting by special performances from Lola Amour, I Belong to The Zoo, and Unique.

No one went home empty-handed as, at the end of the night, the event hosts announced that the original songs performed by each of the finalists would also be officially released and distributed by Kroma Entertainment.

For more passion-filled experiences and exclusive events, head on over to globevirtualhangouts.ph and discover the passion portal that suits you.