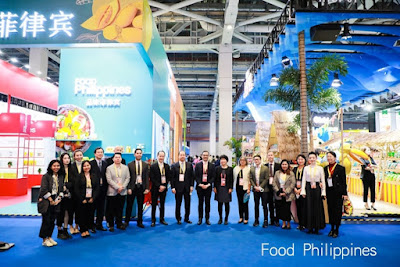 Shanghai, China – The Philippines once more showcased the strength of its food exports to China through a highly successful participation in China’s largest import-themed trade show—China International Import Expo (CIIE), held in Shanghai on 5 to 10 November, 2022.

In his remarks during the opening of the CIIE, Department of Trade and Industry (DTI) Secretary Fred Pascual stated that “The Philippines’ participation in CIIE has become not only a practical response to opportunity, but an imperative to expand our international market, cement the Philippines’ reputation as a reliable sourcing destination for food, and introduce more quality food products into China’s mainstream markets.”The Trade Chief further mentioned that “The DTI’s Export Marketing Bureau (EMB) has also provided the much-needed tools in upskilling our exporters to be fully equipped to join this exposition. We have also partnered with the private sector through Liwayway China, which carries the highly renowned “Oishi” brand – a brand that is deeply cherished with fond memories both in the Philippines and in China, and a testament that quality products can truly be a bridge that connects our country, and our people.”The Country’s participation is supported by the Philippine Trade and Investment Center (PTIC) in Shanghai, Center for International Trade Expositions and Missions (CITEM), Philippine Consulate General in Shanghai, and in partnership with our Department of Agriculture’s Office of the Agriculture Counsellor (OAC) in Beijing.Additionally, the DTI, through its Trade Promotions Group (TPG) and the EMB also formed strategic linkages via signed cooperation intentions with 2 of China’s largest food chambers – the Beijing based China Chamber of Commerce of Foodstuffs and Native Produce (CFNA) and the Shanghai Food Association (SFA). With both chambers having a combined number of 7,500 member companies, these cooperation arrangements will be vital to enhance cooperation between food exporters in the Philippines and Chinese food companies in areas of business matching, technical cooperation, and investments to boost capacities in food production.TPG OIC, Assistant Secretary Glenn Peñaranda affirmed the importance of these agreements and commented that “We value the partnership with CFNA and SFA as we pursue increased collaboration in enhancing food trade. We hope that this can progress to deeper collaboration in the whole value chain in food production, processing, and marketing”.Likewise, PTIC Shanghai Head Mario C. Tani said, “The amount of products we export to China has vastly increased in the past five to six years, and sales were five times larger compared to the first time the Philippines has participated in the 2018 CIIE."For this year’s CIIE, due to strict travel restrictions still in place related to China’s Zero-Covid Policy approach, the official Philippine delegation was physically led by the Philippine Consulate General in Shanghai as represented by Consul General Jose Ignacio. In the official pavilion opening at Shanghai’s enormous 500,000 sqm National Exhibition and Convention Center (NECC), CG Ignacio stressed in his message that “What is constant is that the FOOD PHILIPPINES Pavilion’s central message - “healthy and fresh”, as only food products from the Philippines can offer, bar none, and as devoted and new buyers and importers alike can strongly attest to.”At the forefront of the CIIE “FOOD PHILIPPINES” Pavilion design and conceptualization, CITEM presented this year a unified one-country promotional approach featuring three brands – “FOOD PHILIPPINES”, “COCONUT PHILIPPINES”, and the famous “Oishi” brand by Liwayway China, with a single storyline—a call to experience a “Festival of Island Flavors”.For the first time, several Philippine coconut products were on display at the Coconut Philippines Pavilion. The Country is known worldwide to be a major producer and supplier of coconut oil, and the exhibits did not only showcase coconut oil in various forms, but also other innovative products made from coconut—the tree of life.A key partner for the CIIE, the Department of Agriculture (DA), through the OAC in Beijing, also highlighted new and exciting products featured in this year’s expo, namely Philippine specialty coffee, and innovative coconut-based products.Agriculture Counsellor Ana Abejuela reiterated the need to sustain the good momentum of the Philippines' agricultural exports to China. “The Philippines is already the top exporter of tropical fruits such as bananas and pineapples to mainland China. We must sustain this momentum by introducing even more innovative and exciting products through the CIIE such as PH specialty coffee and where to introduce this best but in the city known to be the coffee capital of China—Shanghai, and at the largest import expo—CIIE.” The Philippine specialty coffee brands were well received by coffee aficionados in both offsite and onsite tasting events.With a record high of 62 food and food-related exporting companies from the Philippines, total sales recorded from this year’s participation reached USD655.15 million (exact amount: USD655,145,756.02), the highest yield recorded for a Philippine country participation anywhere in the world for the year, and the highest sales generated from the CIIE, since its inception in 2018. Of this total amount, 97% came from onsite sales and bulk purchase contracts, with 3% coming from online business matching activities.In 2018, the CIIE was launched as one of China’s major trade promotion initiatives and was supported by Chinese President Xi Jinping who attended the first 2 editions in 2018 and 2019 in Shanghai. The Philippines registered sales of USD128 million in 2018 and USD256 million in 2019. Despite the pandemic, increased sales were generated both in 2020 and 2021.
Posted by Boy Raket at 11:30 AM