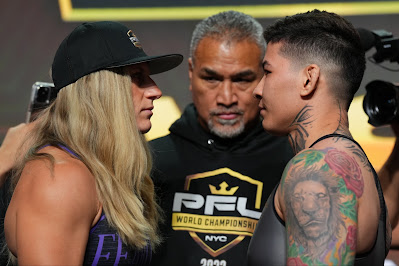 Harrison, who weighed in at 154.4-pounds, is gunning for her third-straight reign as PFL Women’s Lightweight Champion. A win on Friday will make her the league’s first and only three-time champion and cement her place as the best fighter in women’s MMA today.

Looking to end Harrison’s unbeaten streak will be Pacheco, who weighed in at 154.2-pounds. Pacheco has won her last five fights by knockout and is looking to claim her first PFL World Championship when she squares off with Harrison again.

Loughnane, who weighed in at 144.8-pounds, will compete for the first PFL championship of his career. The Manchester native ran through some of the league’s best 145-pounders to reach the finals and earn a shot at PFL gold and the million-dollar purse.

Jenkins, who weighed in at 145-pounds attempts to add another championship to his already impressive list of accolades. The former NCAA Division I wrestling champion will try to grapple his way to a PFL title and a million-dollar check.