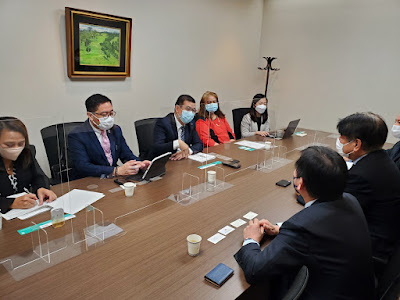 Osaka, Japan, 22 November 2022 — Following the successful series of investment promotion activities in Tokyo and Nagoya, the Department of Trade and Industry (DTI) Offices in Japan — Philippine Trade and Investment Center (PTIC) in Osaka and the Philippine Board of Investments (BOI) recently concluded a Philippine Investment Roadshow in Osaka City which aims to seek potential Japanese investors to expand their operations in the Philippines, last 18 November, 2022.

Several high-profile activities constituted the investment roadshow, starting with meetings with PTIC Osaka’s important strategic partners such as with officials of Resona Bank, Ltd. and the Osaka International Business Promotion Center. This was followed by a high-level Philippine Investment Round Table Meeting hosted by Resona Bank at their Osaka headquarters, attended by major Kansai-based companies, many of which already have operations in the country.DTI Undersecretary (Vice Minister) and Board of Investments (BOI) Managing Head, Ceferino S. Rodolfo, delivered the Keynote Presentation at the Investment Round Table, where he discussed the strategic investment opportunities in key sectors particularly for Japanese companies, government incentives, and the country’s comparative advantages.During the forum, Undersecretary Rodolfo discussed the current economic outlook, strategic opportunities for Japanese manufacturing players, and the country’s menu of investment incentives and programs. Additionally, he highlighted the countries’ exceptional performance as it recovered from the negative effects of the pandemic, especially as the manufacturing industry, rose to being second in ASEAN in January to October 2022. PH exports also grew by 14.4% and foreign direct investments (FDI) by 82% in 2021.He also cited game-changing key policy reforms offering to provide valuable investment incentives and programs to reduce cost of doing business in the Philippines such as the: Corporate Recovery and Tax Incentives for Enterprise (CREATE) act, the amendments made to the Retail Trade Liberalization Act (RTLA), Foreign Investment Act (FIA), and Public Services Act (PSA) which are all envisioned to attract more Japanese participation in the country’s FDI pipeline.Deputy Consul General Melchor Lalunio of the Philippine Consulate General in Osaka delivered the closing remarks at the Philippine Investment Round Table Meeting, encouraging Japanese companies to explore investment possibilities in the country.In addition to the executives representing various companies at the round-table meeting, PTIC Osaka also organized a series of one-on-one meetings for the Undersecretary and the BOI executive Directors, with top executives of various Kansai-based Japanese companies, which all announced their plans to expand their operations and infuse additional investments into the country. These companies belonged to key manufacturing sectors such as precision metal parts and components, high-end garments manufacturing, precision plastics and components, and software development among others, two of which signified their intention to establish manufacturing facilities in CALABARZON, in addition to existing facilities in Cebu.PTIC Osaka has identified several priority sectors (such as automotive industry manufacturing and EV, innovation and R&D, Agriculture modernization, pharmaceutical and life sciences, infrastructure development, among others) and key strategies in the delivery of its trade and investment promotion mandates, among them, aggressive promotion of the Philippines as a preferred destination for Japanese supply chain players, mostly belonging to the Small and Medium Enterprise bracket, which comprise 99.7% of all Japanese companies.This is particularly important as there is a pressing need to significantly improve the country’s manufacturing supply and value chain ecosystem to support the presence of major manufacturing conglomerates already operating in the country, as well as to attract the entry of new players and reduce dependence on importation in the sourcing of manufacturing imports and raw materials.
Posted by Boy Raket at 10:36 AM