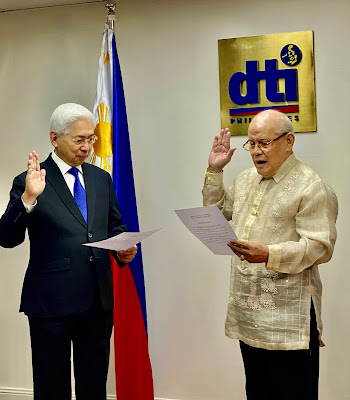 The Center for International Trade Expositions and Missions (CITEM), the export trade promotion arm of the Department of Trade and Industry (DTI), mandated in promoting the Philippines as a reliable source of quality export products and services in the global market, announced that Dr. Edward L. Fereira, Ph.D. has been recently appointed by President Ferdinand “Bongbong” Marcos Jr. as its Executive Director. Fereira took his oath of office before DTI Secretary Fred Pascual at the DTI Main office.

He enters the country’s trade promotions industry bringing with him three decades of experience in the fields of science, business management, marketing, diplomacy, and now government service.In 2018, Fereira was appointed as the Special Envoy of the President of the Philippines to the Republic of Kazakhstan. He also served as the First Honorary Consul of the Republic of Kazakhstan in the Philippines from 2004 to 2011.The new executive director was also a former President of the Management Association of the Philippines (MAP), the country’s biggest business and management organization composed of top business luminaries. His stint in MAP became his springboard to diplomacy as he led and chaired various private and government trade missions to different countries.Fereira’s government career includes leadership roles at the National Development Corporation (NDC), Philippine International Trading Corporation (PITC), First Cavite Industrial Estate (FCIE), Manila Gas, and Land Bank Realty Development Corporation (LBRDC) among others.Fereira was conferred the degree of Doctor of Philosophy in Technology Management by the Technological University of the Philippines (TUP). He also holds an MBA degree from the University of California Los Angeles (UCLA) and a Master of Science (MS) in Marketing Management Development from Syracuse University in New York. He graduated from the University of the Philippines with a bachelor's degree in microbiology.After completing his post-graduate studies in lunar microbiology, Fereira worked for the National Aeronautics and Space Administration (NASA), under the Apollo 11 “First Man Moon Landing” project, as the first Filipino Lunar Microbiologist who examined the moon rocks brought back by Neil Armstrong, Edwin Aldrin and Michael Collins.Before Fereira’s appointment, CITEM Deputy Executive Director Ma. Lourdes D. Mediran served as the agency’s officer-in-charge (OIC).
Posted by Boy Raket at 11:00 AM