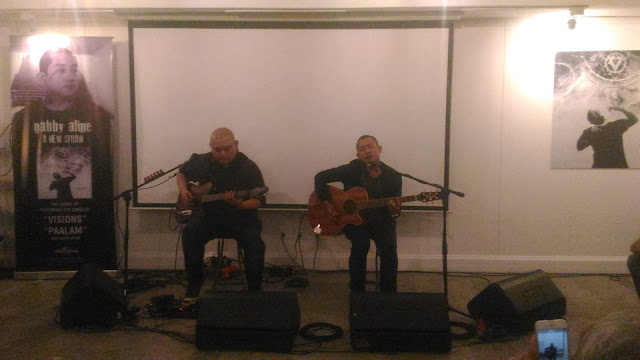 Gabby Alipe began his musical journey as the frontman of the Cebu-based rock band Urbandub in 2001. When the band announced a hiatus in 2015, Gabby welcomed the opportunity to take a breather and focus on other things.

Bands usually goes on hiatus so each member can pursue their individual interests. For a time, Gabby’s interests were limited to his company and his family—particularly his son Jacob—but eventually the call of the music scene proved to be impossible for him to resist. Not because Gabby craved fame or fortune, but because he’s an artist who needs a creative outlet.

For Gabby, the most fulfilling part of playing in a band was being able to tell stories through music. “Sixteen years after I began my journey, here I am embarking on a new challenge as a solo artist. It’s definitely a big adjustment. I’ve always been more comfortable in a band setting, where I can feed off my bandmates in terms of arrangement and songwriting. This time it all has to come from me. I decided to call my EP A New Strain because it’s something new. It’s more organic—I employed a simpler approach on it, compared to all the stuff I did with Urbandub,” he explains. “Back then everything had to be grand, in-your-face and loud.”
Gabby was Urbandub’s main songwriter, but he says he still had to write songs that fit each member’s individual taste. When he went into the studio to work on songs for his debut solo EP, he had more creative freedom than he ever had before.

“The band’s arrangements and songs were always a group effort. I may have been Urbandub’s main songwriter, but I was only one aspect of the whole. My music is different now because I don’t have any of my bandmates to help me. I also made a conscious effort to shy away from the songwriting approach I employed when I was still with Urbandub,” he says.

Gabby admits he felt a little uncertain when he began working on A New Strain. Having played in a band for over a decade, he was used to having other people to rely on. He reveled in his newfound freedom as a solo artist, but he still wanted to have someone he could bounce ideas off of. That’s where his producer Eric Perlas came in.

“The recording process was a lot scarier this time,” Gabby says. “I did everything alone for the first time. At first, there was a lot of confusion and uncertainty. I wasn’t sure whether I could come up with songs I would be proud of. But my producer, Eric Perlas, really helped me focus, and after that everything went smoothly. I owe a lot to him. In a lot of ways, he became my ‘bandmate’ for this project. Eric had a big role in the creation of this EP.”

Aside from Eric, Gabby also surrounded himself with some A-list collaborators. “I got the chance to do two songs, ‘Demons’ and ‘Paalam’ with Buddy Zabala and Raimund Marasigan, who played bass and drums, respectively. Those two were part of the Eraserheads, and it was such a huge honor and privilege for me to work with my music heroes. I’m a Hip-Hop/Rap fan also, so I enjoyed working with Gloc-9 and Cebuano rapper Pain-in-the-Neck on a remix of my song ‘Ether.’”

A New Strain is bannered by the lead single “Visions.” According to Gabby, he wrote it because he wanted to include a song about having a positive mindset on his EP.


“‘Visions’ is about being positive in the face of whatever struggles you encounter,” he explains. “It’s about how a person has potential and can achieve anything as long as they believe in themselves and not let fear control them As long as you have a clear vision of the future and of your goals—no matter the hindrance or road blocks—as long as you work hard.”

Gabby is also excited about the other songs on the EP. “There’s a song called ‘Ether’ on it, and it’s about being lost and trying to find your way. ‘Demons’ is about setting aside negativity, ‘Ocean’ is an expression of love, and ‘Paalam’ is about letting go of the past in a positive way,” he shares.

Gabby made every effort to stretch himself artistically on A New Strain while making sure to come up with material that captures where he is at this point in his life.

“As a songwriter, for this particular EP, I wanted to challenge myself musically. I wanted to step out of my comfort zone and come up with a collection of songs that would best describe my current mindset, highlight my personal preferences in music, and most importantly, have a good message,” he says.

As Urbandub’s frontman, Gabby enjoyed commercial and critical success as a musician. The band put out their first album Birth in 2001 and it was considered a success, but only in Cebu. Distribution problems prevented it from finding an audience beyond the band’s hometown. It was only when Gabby and his bandmates released Influence two years later that they finally hit the big time. It sold well and they even won awards for it. Urbandub released four more albums—Embrace, Under Southern Lights, The Apparition and Esoteric and an EP- Sending A Message—before announcing an “indefinite hiatus” last year.

Looking back on his time with Urbandub, Gabby describes himself as an “accidental singer,” although he grew into that role over time and is now comfortable enough in it to strike out on his own.

“I was never really a singer. I never thought I’d end up fronting a band. I always saw myself as a guitar player and songwriter. My journey as a musician began in high school. I joined different bands as a guitar player. When I was in college, I began playing in bands in Cebu as a bass player. When one of my bands didn’t want to write original material, I decided to form a band with my friend Jed Honrado. Jed and I formed Urbandub, and that led me to start singing—only because nobody knew who we were, so nobody was interested in becoming our vocalist. Now, sixteen years later, after Urbandub’s run, I’m taking on a new challenge as a solo artist.”

“I hope they’ll be able to relate to what I’m trying to say in these songs. Everyone will have a different interpretation of the songs and how they can apply all the lyrics to their lives. Regardless, I hope they take something positive away from this EP. I will always be grateful to all the Urbandub fans, but I hope they continue their journey with me. At the same time, I want to gain new listeners as well.”

Gabby says that all the songs on A New Strain are his personal stories, and he’s looking forward to touching people with them.

“I’m a storyteller. The new EP is basically a collection of stories and thoughts that I’ve accumulated through my experience in music and life. My goal is to share my stories with people who are willing to listen, and hopefully they’ll be able to relate to my songs.”

A New Strain is out under MCA Music on digital downloads and streaming via Spinnr, Spotify, iTunes, Apple Music, Deezer and VEVO and on CDs at Astroplus and Astrovision outlets.

View a sampler of his live performance in A Space watch: