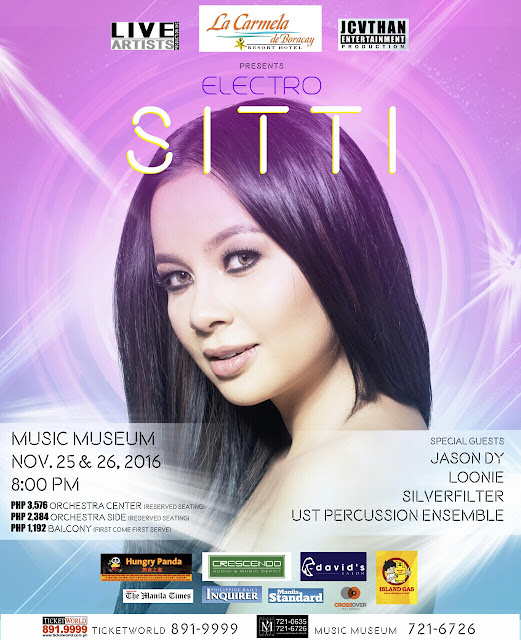 Sitti celebrates her 10 years in the music industry as a bossa nova artist with a concert and a single launch. The concert billed ElectroSITTI doubles as her birthday celebration. ElectroSITTI is also the title of her new album. ElectroSITTI is a two- day event  set on November 25 and 26, 2016, 8:00PM at the Music Museum. Her guests include Jason Dy, Loonie, Silver Filter and the UST Percussion Ensemble. The concert is divided into two parts.

The first part features Sitti as her old self singing her bossa nova hits. She will also perform a cut entitled, “Tangled” from the upcoming album. The second part will see Sitti in a combination of bossa nova songs and EDM with her good friend DJ Silver Filter, who is a Pinoy DJ known in the indie scene. One of these songs is “Bid You Love”, about feeling too much and being filled with so much desire. Audiences can still chill out and dance at the same time. Sitti is prepping up for this concert by listening to EDM playlists whenever she’s running or driving to get the pulse of EDM. It’s her first time to listen to EDM covers.


Sitti notes that in the EDM scene, the singers have strong vocal prowess. Her cross over to Electronic Dance Music, Sitti believes,, is one of God’s perfect plans. She is confident that the SITTIZENS will like the new changes in life. “My fans are mature now and change has come. You just have to enjoy the ride without losing yourself along the way.” According to her, she is still the same old Sitti, only that, the music background has changed. “It’s a mixture of new elements. Its an experiment.” She doesn’t believe she has down sides in her life. Her career, her music, her fans, her family balance everything in her life. The SITTIZENS are what keep her from continuing her singing. Sitti is happily married to businessman and triathlete Joey Ramirez. She says that being married has worked to her advantage. Joey has given her courage and confidence. In fact, Joey is the first person who listens to her songs whenever she has new compositions. Joey is a church choir member and plays the guitar. She hopes that ElectroSITTI will reach a lot of people. She is very thankful for every opportunity that has come her way. She is grateful that TV networks and radio stations continue play her songs. Sitti’s last album was released in 2015 entitled, “Singles Bossa Nova Trio”.