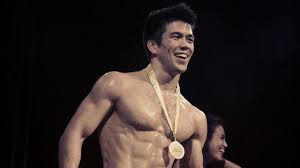 ONE Championship bantamweight standout Mark “Mugen” Striegl (14-2) is set to face Brazil’s Rafael Nunes (10-1) when the promotion returns to the Mall of Asia Arena on Friday, December 2 for ONE: Age of Domination. Streigl, 28, joined ONE Championship in 2015 and was recently named one of the hottest prospects in Asian MMA.

The Filipino-American stalwart splits his training between Evolve MMA in Singapore and the high-altitudes of Baguio City for his next matchup and says mixed martial arts is getting really big in the Philippines.

“Baguio is one of the best places to train in the Philippines because it’s high altitude. It’s 5,000-feet above sea level. It’s great for strength and conditioning,” said Striegl. “Manny Pacquiao also trained in Baguio in the past for some of his biggest fights. It’s been fantastic for my training.”

Striegl made his ONE Championship debut in April of 2015, defeating American Casey Suire impressively by first round submission. In his second bout months later however, he fell to Filipino-Australian prospect Reece McLaren.

Since his last bout, Striegl has been hard at work preparing for his return, training with none other than ONE Heavyweight World Champion Brandon “The Truth” Vera.

“Here in Manila I’ve been fortunate enough to train with Brandon Vera and AJ Matthews. Mark Munoz also came through one time so I got to pick his brain a bit,” said Striegl. “There are so many good gyms to work with in Manila. MMA is getting really big in this country. I’ve just been jumping around and training with Brandon and it’s been great.”

A well-rounded mixed martial artist with strengths in both striking and grappling, Striegl is one of the country’s top combat sports athletes. He began his career competing for various MMA promotions across Asia before landing a roster spot in ONE Championship last year.

As someone who has seen the rise of MMA as a sport in Asia, Striegl can’t help but feel in awe of the tremendous growth of combat sports in the region and credits a majority of it to eight-division boxing world champion Manny Pacquiao.

“One of the greatest fighters of all time, Pacquiao, is a legend here and pretty much all over the world. He has put the Philippines on the map as far as fight sports are concerned. He’s a true global icon and one of my inspirations.”

During his time in Manila, Striegl says he just recently met Pacquiao for the first time in person. Pacquiao is training for his highly-anticipated return to boxing against WBO welterweight champion Jessie Vargas this November 5. He is also a full-time politician who owns a seat at the Philippine senate.

“I went to one of [Pacquiao’s] senate hearings and met him afterwards,” said Striegl. “Super nice guy, super down to earth guy. Just a humble, nice guy and I think that’s why he has so many fans. He’s the people’s champ. Everyone can relate to him.”

Pacquiao’s unique style, Striegl says, is something he tries to emulate in the MMA cage. And just like Pacquiao, Striegl aims to bring a world title back to the Philippines.

Against Brazil’s Nunes this December, Striegl has the opportunity to get back on the right track in his pursuit of ONE Championship gold. It won’t be easy, but Striegl says by channeling his inner- “Pac-Man”, he hopes to be able to make his people proud by becoming a world champion.

“One thing I love about Manny’s fight style is that he’s an action-packed fighter. He just keeps going and going and moving forward. That’s something I try to do in my fights,” said Striegl.

“You’ll never see me in a boring fight. I always press the action, I always come forward. I’m not a point fighter. Sometimes I put myself at risk by doing that but it’s better than being a point fighter, like a Floyd Mayweather-style kind of fighter.

“My goal when I entered this sport was and is to win a world championship title for the Philippines and bring it back here to Manila. That’s what I think about and it’s been my goal since I was young.”


*This is Press Release
Posted by Boy Raket at 2:06 PM