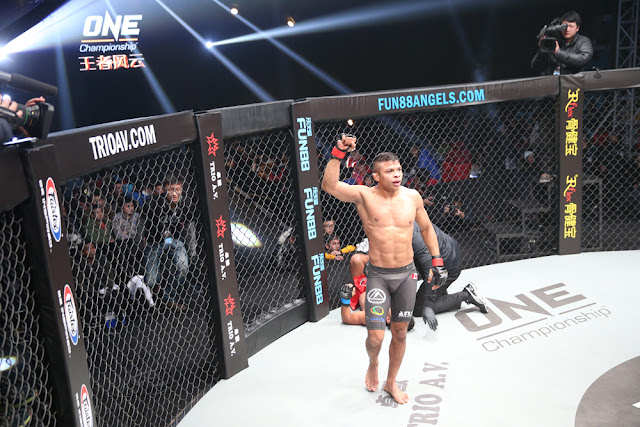 Reigning ONE Bantamweight World Champion Bibiano “The Flash” Fernandes may have been born and raised in Brazil, but the ONE Championship titleholder feels deep in his heart that Manila is his home away from home.

Fernandes (19-3) is the promotion’s top bantamweight talent and is one of the best fighters in the world. He will take on Filipino-Australian sensation Reece “Lightning” McLaren (9-3) in the co-main event of ONE: AGE OF DOMINATION which takes place Friday, 2 Decemberat the Mall of Asia Arena in Manila, Philippines.

Fernandes has competed four times so far in Manila. His stint this upcoming ONE Fight Night will be his fifth. The Brazilian says making his ONE Championship debut in Manila was a special moment in his career.

“First time I went to Manila I thought about Muhammad Ali, the boxer, and that I fought in the same arena he fought,” said Fernandes, who debut for ONE at the Araneta Coliseum. “For me that was a big thing. Ali fought there and I fought the same place as him. So for that reason, fighting in Manila is very special for me.”

Fernandes began his tenure with ONE Championship back in 2012 at the event dubbed “Pride of a Nation”. It was ONE’s fifth show overall since establishing the promotion in 2011. Fernandes at the time was being positioned as a superstar in Manila.

Since then, Fernandes has strung together eight straight victories including four exciting finishes. He hasn’t lost since dropping a unanimous decision to Japanese fighter Hiroyuki Takaya in 2010, making him ONE’s longest reigning champion.

Yet victory hasn’t come easy he says. Fernandes believes that the key to his success is the work he puts into training.

“I believe in myself. I believe if I train right and do everything right I’m going to do my best and when I do my best the outcome is victory,” said Fernandes. “I always have confidence with my training, I always try to be healthy. What happens in the fight is in the fight. Be sharp, be strong, be smart, be quick.”

Out of his 19 total victories, nine have come by finish. The proud champion is hoping to put on a good showing against McLaren, who is 11 years his junior. At 36-years old, Fernandes has not shown any signs of slowing down. In fact, he gives fans a slight hint at what’s to come on fight night.

“[Reece McLaren] is a young guy. He wants to fight. He’s going to bring the fight,” said Fernandes. “But they call me ‘The Flash’ because I finish guys quick. Until today I still have that nickname.”

Next Friday night Fernandes returns to Manila. He defends his ONE Bantamweight World Championship belt for the fifth time.

“I like everything about Manila. Manila is a very nice, warm place. I love the people,” said Fernandes.

*This is Press Release
Posted by Boy Raket at 4:58 PM