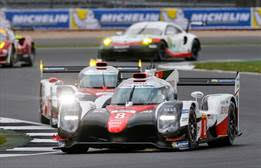 Michelin Chief Representative in the Philippines, Michael Nunag, said the performance and consistency of the tires was a particular source of satisfaction, as was their ability to climb swiftly to their working temperature – an especially appreciable feature on the British venue’s cold asphalt.

Interesting battles in both the LM P1 and LM GTE Pro classes provided the big turnout of spectators who braved the wind and rain to witness the excitement at the 2017 FIA WEC’s opening clash.

In the blue ribband prototype class, Toyota Gazoo Racing dominated both the qualifying and early stages of the race, chased by two Porsche LMP Team cars which gradually eased back into contention. After the second round of refuelling stops at around the 90-minute mark, the two German machines succeeded in moving up to second and third places after successively passing the N°7 Toyota TS050 – Hybrid (Conway, Kobayashi, Lopez) which was in the hands of Kamui Kobayashi at the time.

The Porsches continued to close the gap to the front-running N°8 Toyota (Buemi, Davidson, Nakajima) as dark clouds gathered over the circuit, and rain finally started to fall in the last 30 minutes before the halfway mark as the N°1 Porsche 919 Hybrid n°1 (Jani, Lotterer, Tandy) took command in the slippery conditions.

The change in weather forced the teams to reconsider their initial strategies and the two Porsches pitted to switch to MICHELIN’s Hybrid ‘intermediate’, on which they were several seconds a lap faster than the Toyotas, which were still on slicks. The storm soon blew over, however, and Porsche failed to reap any real benefit from its tactic.

With the track now dry once more, the two Porsches stopped again to take fuel and revert to slicks as Antony Davidson, who had stayed out in the N°8 Toyota, recovered top spot in the course of his long stint. The N°7 Toyota was still fourth at this point.

This was the order midway into the six-hour race when another storm broke out. Argentine FIA WEC rookie José-Maria Lopez was caught out in the slippery conditions in the N°7 TS050 – Hybrid. He crashed heavily but managed to nurse his badly-damaged car back to the pits in a bid to make repairs.

While his car was being extracted from the gravel trap, Race Control deployed Full Course Yellows and ultimately the safety car to permit the marshals to clean up the debris.

The interruption lasted almost an hour, which meant there were only two hours remaining before action resumed.

After taking on fuel and fitting fresh rubber, Sébastien Buemi took over for the race’s final phase as Nick Tandy also pitted for the N°1 Porsche 919 Hybrid’s last stop. Meanwhile, Brendon Hartley (N°2 Porsche) did not change tires during his last stop and re-emerged in front, forcing Buemi to pull out all the stops in his attempt to catch and pass the New Zealander despite the traffic and more heavy rain. The Swiss driver’s efforts were rewarded when he swept past in a spectacular late move before powering to a well-earned victory.

Toyota’s winning trio was joined on the podium by the crews of the N°2 and N°1 Porsche 919 Hybrids.

The LM GTE Pro battle saw Ford Chip Ganassi Team UK take the spoils with the class’s pole-winning Ford GT of Priaulx, Tincknell, Derani. The N°67 car got away well and was soon joined by the N°66 sister car of Mücke, Pla, Johnson. During the opening hour, however, the two American cars found themselves under pressure from Frédéric Makowiecki’s N°91 Porsche 911 RSR which performed a thrilling fightback from the penultimate spot on the class’s grid. The Frenchman’s hopes of victory ended by a lengthy pit stop, however. 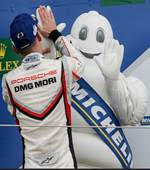 The ensuing scrap for the podium between the Porsche 911 RSRs and the N°71 (Rigon, Bird) and N°51 (Calado, Pier Guidi) Ferrari 488 GTEs kept the crowd entertained all the way to the chequered flag which James Calado, Alessandro Pier Guidi passed in second placed, chased by Porsche’s Lietz, Makowiecki.

Jérôme Mondain (manager of Michelin’s endurance racing programme): “We were very pleased with the way our tires performed in today’s cold, unsettled weather. They succeeded in reaching their working temperature particularly quickly and their consistency exceeded our expectations. We will have a debrief with pour partners in the next few days but everyone reported how happy they were with our solutions. Our focus is now on preparing for the 6 Hours of Spa-Francorchamps in less than two weeks’ time.”

Sébastien Buemi (winner, with Anthony Davidson and Kazuki Nakajima): “We couldn’t have wished for a better start to the season. It was a fully deserved win for us and Toyota, and payback for a strong performance, our perseverance, and the reliability of our car and its Michelin tires. Michelin’s new range unsurprisingly lived up every bit to its promise!”

The tires used during the 2017 6 Hours of Silverstone

Michelin’s LM P1 partners opted for MICHELIN’s MEDIUM slick, while the majority of the LM GTE Pro runners fitted the MEDIUM tire, occasionally combining it with the HARD alternative.