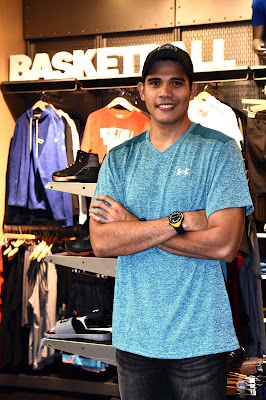 He continues by saying that even when he was in high school, he was dead-set on his dreams, though, it didn’t seem possible to attain his ambition, he held on to it, “Nung high school ako, ang laro namin di naman seryoso.  Nung nag-college ako, 4 a.m. pa lang gising na ako, tapos Team B ako ng 4 years.  So feeling ko, bakit ganoon.”

Having accomplished a dream that most young basketball players aspire for, Jervy has made it his advocacy to inspire more young players to hold on to that dream.  He has become the voice for Under Armour’s latest program,  FIBA 3x3 U18 Asia Cup presented by Under Armour.

3x3 basketball, or streetball is the largest urban team sport of the world. With 12-second shot clock, and 10-minute or first team to 21-point format, the games are usually fast, accessible, and entertaining for the players and audience alike. The format made its global competitive debut at the 2010 Summer Youth Olympics in Singapore and the World Championships have been regularly organised by FIBA since then.
The Under Armour 3x3 Southeast Asia 2017 Tournament will take place in Cebu at the Cebu City Sports Club and Ayala Center Cebu on April 22-23, 2017.  In Manila, it will take place at Bonifacio Global City on April 28-30, 2017.
Organised by Under Armour in Indonesia, Malaysia, Singapore, and the Philippines, the tournament is open to all U-18 male and female basketballers.
Each player who signs up will receive a set of Under Armour teamwear that consists of an UA Tech™ Tank Top and UA Baseline Basketball Shorts. All players will also receive 25% discount on Under Armour basketball footwear, including the latest signature Curry 3 Basketball Shoes that deliver infinite support and total control on the court.
In addition to winning up to S$1,000 or Php36,000 in prize money, respective country’s basketball federation or association may also select the winning teams to be part of the national contingent and compete against other National Teams from Asia in the FIBA 3x3 U18 Asia Cup presented by Under Armour on 26–28 May 2017 held in Cyberjaya Gem in Mall, Malaysia. Flights and accommodation will be fully paid for the selected teams.
“Kung gusto mo makamit ang pangarap mo, kailangan mo mag-try.  Kailangan sabihin mo kaya mo ito.  Magsikap ka, at wag mawalan ng pag-asa.  To all the aspiring basketball players, this may be your chance na mabago ang buhay mo.  Sumali kayo sa UA 3x3”, says Cruz.
Registration locations are available online at www.ua3x3.com and can be made at all Under Armour Brand Houses and partner stores from now until 12 April 2017.  Visit www.ua3x3.com for more information on the UA 3x3 Under 18 Tournament.

About Under Armour, Inc
Under Armour (NYSE: UA), the originator of performance footwear, apparel and equipment, revolutionized how athletes across the world dress. Designed to make all athletes better, the brand's innovative products are sold worldwide to athletes at all levels. The Under Armour Connected Fitness™ platform powers the world’s largest digital health and fitness community through a suite of applications: UA Record, MapMyFitness, Endomondo and MyFitnessPal. The Under Armour global headquarters is in Baltimore, Maryland.

For further information, please visit the Company's website at www.uabiz.com.

About Test of Will

Started in 2016, the Test of Will is an annual Southeast Asia-wide fitness challenge in celebration of human performance, functional fitness and the training lifestyle. The modern and uniquely urban fitness challenge is accessible to everyone with the will to train and a drive for competition.