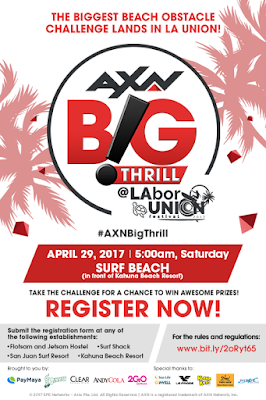 This summer, AXN and Sony Channel bring all the high energy and excitement in the surfing capital of the north for LAbor UNION Festival 2017 from April 28-30, 2017, a three-day event which features a variety of sports and other fun-filled activities including performances from iconic Filipino artists.
On April 29, take the challenge in the AXN Big Thrill, a beach obstacle course competition to be held on the Kahuna Beach Resort beachfront.
In a test of agility and speed, participants tackle a series of physical challenges that include the ramp down, half pylon, shaky balance beam, and more! In the qualifying round, the top 10 participants in each division with the best times move on to the final round, where the three male and three female finalists with the best times will be declared the winners.
Registration forms will be available at Kahuna Beach Resort, San Juan Surf Beach Resort, Flotsam and Jetsam Artist Beach Hostel and Surf Shack, La Union.
Later in the day, silent discos are all the craze as this unique musical experience brings partygoers together at San Juan Surf Beach Resort for the Sony Channel Sunset Silent Disco.
From 4pm to 12mn, dance to the beats of Slow Jam Hip Hop or Chill House music and start enjoying the sunset view while listening to the music mixes of DJs Cam Abecina, Abdel Azis and DJ Badkiss on wireless headphones.
Get into the groove – where silence meets surreal – and rave about the best party you’ve ever been to!
AXN Big Thrill is brought to you by PayMaya, C2 Cool & Clean, Clear, Andy Cola and 2Go Express. Special thanks to Kettle Corn, Sun Life Go Well, Le Froge, Kit Kat, and Tiger Balm.
Sony Sunset Silent Disco is brought to you by PayMaya, C2 Cool & Clean, and 2Go Express. Special thanks to Kettle Corn, Kit Kat, and Purederm.


About Sony Channel
Sony Channel is the premier destination for female-skewing entertainment with the biggest and best of Hollywood. Designed for the socially connected viewer, Sony Channel features some of the most captivating and talked-about drama, comedy, lifestyle, and reality programs on TV, all airing close to the U.S. telecasts, together with popular feel-good movies.


Fresh, confident and stylish, with a dash of clever wit, Sony Channel is visually stunning with a brand identity that perfectly complements its line-up of high calibre programming. Sony Channel appeals to a female-skewed, male-inclusive audience who loves to escape, engage, and lose themselves in premium content. Viewers are modern, social, stylish, and aspirational.