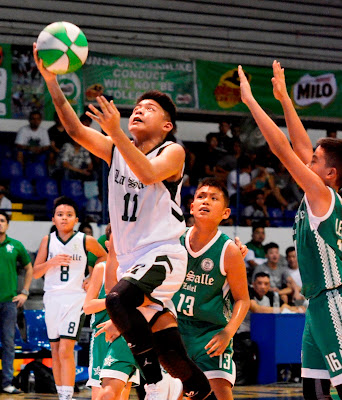 SBP-Passerelle two-time defending SBP division champion, La Salle Greenhills, is determined to win a third consecutive championship title in the upcoming national finals of the 32nd (Small Basketeers of the Philippines) – Passerelle, the largest twin tournaments in the country, to be held on December 2-3, 2017 at the Cebu Coliseum in Cebu City.

The greenies will face Berkeley School of Baguio from Luzon, Sacred Heart School-Ateneo de Cebu from Visayas and Ferndale International School of Zamboanga from Mindanao.

Vying for the Passerelle division championship are San Beda College from the National Capital Region, International School for Better Beginnings (ISBB) from Luzon, Hua Siong College of Iloilo from Visayas and Holy Child College of Davao from Mindanao.

Organized by the country’s premier sports clinic, Basketball Efficiency Scientific Training (BEST) Center, the 32nd SBP-Passerelle Twin Tournaments is supported by MILO, in cooperation with Rain or Shine Elasto Paints, Chris Sports, and SKLZ. It allows teams of under 15 and under 12 age groups to apply what they learned in basketball training and to showcase their skills.

BEST Center is a Hall of Famer of the Philippine Sportswriters Association (PSA) for Grassroots Development and the only corporate recipient of the Olympism Award from the Philippine Olympic Committee (POC).

For more information about BEST Center’s classes and tournaments, call the hotlines 411-6260, 3723066 and 372-3065, email bestcentersports@gmail.com or follow its official Facebook page at https://www.facebook.com/BESTCENTERSPORTS/.
Posted by Boy Raket at 6:30 PM