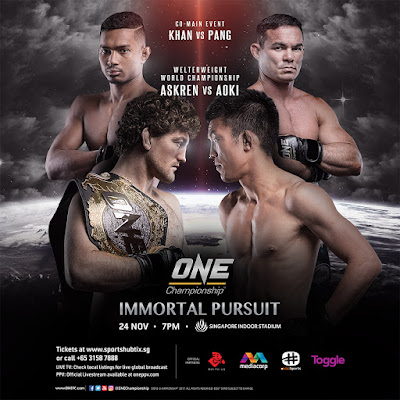 The largest sports media property in Asian history, ONE Championship™ (ONE), has just announced an additional bout for ONE: IMMORTAL PURSUIT, which will be held live at the state-of-the-art Singapore Indoor Stadium on 24 November. Fans will be treated to another exciting evening of authentic martial arts action as a three-round atomweight bout has been added to the blockbuster event, pitting Japanese martial arts veteran Mei “V.V” Yamaguchi against Filipino top contender Gina “Conviction” Iniong.

Mei Yamaguchi, ONE Athlete, stated: “I commend Gina Iniong for taking this match on a short notice. She is a good martial arts artist with promising potential in the division. Gina is in good hands, training with no less than the best at Team Lakay. I have faced her before, and she is always in good condition. As always, I am in tiptop shape for every bout. Brace yourselves for fireworks.” 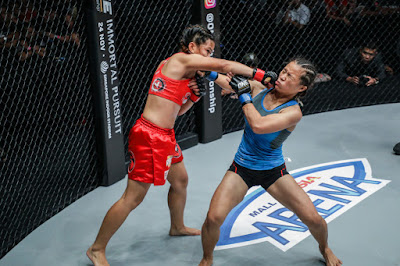 Gina Iniong, ONE Athlete, stated: “Facing Mei Yamaguchi three years ago was like going through the eye of a needle. That bout opened doors of great opportunity for me in this sport. I am expecting a tough duel with her again on 24 November in Singapore. I have lofty goals in ONE Championship, and I must win this match to achieve them.” 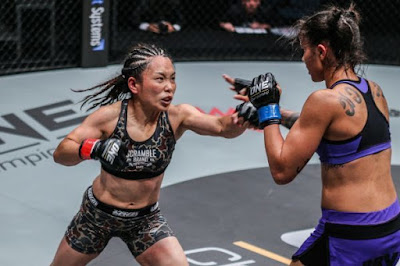 34-year old Japanese martial arts veteran Mei “V.V” Yamaguchi is a female atomweight standout and a former ONE world title challenger from Tokyo. She is the DEEP Jewels Featherweight Champion, and owns seven submissions and two knockouts in her 27-bout professional career. In 2016, Yamaguchi challenged Angela Lee for the inaugural ONE Women’s Atomweight World Championship in an epic showdown that would later win multiple ‘Bout of the Year’ honors from international media publications. In her last bout, Yamaguchi submitted top contender Jenny Huang impressively within two rounds. Another tough opponent awaits her at ONE: IMMORTAL PURSUIT as she is set to square off with Gina Iniong of the Philippines.
Top Filipino women’s martial arts contender Gina “Conviction” Iniong of Baguio City, Philippines, is a six-time national wushu champion and member of the renowned Team Lakay. She owns a professional record of 6-2, with four of her six victories coming by thrilling finish, including two highlight-reel submissions and two knockouts. In front of a hometown crowd last 10 November at ONE: LEGENDS OF THE WORLD, Iniong extended her winning streak inside the ONE Championship cage to two matches with an outstanding second-round finish of Indonesia’s Priscilla Hertati Lumbangaol. Iniong has the opportunity to elevate her stature in the organization’s growing atomweight talent pool as she is tasked to duke it out with Japan’s Mei Yamaguchi.
ONE: IMMORTAL PURSUIT will feature the best and brightest stars in both local and international martial arts scenes, including ONE Welterweight World Champion Ben “Funky” Askren who will defend his title against former ONE Lightweight World Champion Shinya “Tobikan Judan” Aoki in the main event. Meanwhile, Singaporean lightweight standout Amir Khan will take on hard-hitting Australian, Adrian “The Hunter” Pang, in the card’s co-headliner.
For more updates on ONE Championship, please visit www.onefc.com, follow us on Twitter and Instagram @ONEChampionship, and like us on Facebook at https://www.facebook.com/ONEChampionship.
About ONE Championship™
ONE Championship is the largest sports media property in Asian history. Headquartered in Singapore, ONE Championship is the home of martial arts. The world’s most exciting martial arts organization hosts the largest sports entertainment events across Asia, featuring some of the world's best martial artists and world champions, all signed to exclusive contracts, on the largest media broadcast in Asia. In addition to its digital platforms, ONE Championship broadcasts to over 1 billion potential viewers across 128+ countries around the world with some of the largest global broadcasters, including Fox Sports, ABS-CBN, Astro, ClaroSports, Bandsports, Startimes, Premier Sports, Thairath TV, Skynet, Mediacorp, OSN, and more.
Posted by Boy Raket at 9:36 PM