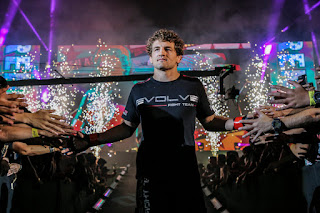 Ben “Funky” Askren isn’t just the reigning ONE Welterweight World Champion, but he is also universally recognized as one of the best welterweights in the entire world.
Askren is highly regarded for his outstanding wrestling background that earned him two NCAA Division I national championship trophies and the privilege to represent the United States at the 2008 Beijing Olympics.
Growing up in the Midwestern United States, a region traditionally known as a hotbed for amateur wrestling, Askren was motivated by the spirit of competition and wanted to participate in a sport where he could be the master of his own fate.
Askren had long planned switch to mixed martial arts and conquer that sport once he hung up his wrestling boots.
Following his 2008 Olympic campaign, Askren made the transition and has flawlessly translated his exemplary grappling skills into his growing skillset.
In his eight-year run as a professional martial artist, Askren holds an immaculate standing of 17-0, 1 No Contest, owning five submission victories and five knockout triumphs.
The 33-year-old American will step into the cage for the very last time on Friday, 24 November as he defends his coveted title against former ONE Lightweight World Champion Shinya “Tobikan Judan” Aoki in the main event of ONE: IMMORTAL PURSUIT, which takes place at the Singapore Indoor Stadium in Singapore.
Coming off masterful performance against talented challengers such as Agilan Thani and Zebaztian Kadestam in 2017, Askren looks to cap off a momentous year and an illustrious career with one last title defense versus a tough opponent like Aoki.
“Shinya is a really good final opponent. Obviously, he is a legend of the sport, and he is a really big challenge on the ground, which is where I like to compete, personally. I am excited for this bout,” he said about his marquee match-up with Aoki.
Askren revealed that he did not think a match with Aoki was an option, considering the 34-year-old Tokyo, Japan native is an Evolve MMA teammate.
However, Askren admitted that the more he thought about it, the more he loved the idea of sharing a martial arts platform with Aoki.
“He is a grappler and has a great skill set that I respect, so I think it will be a great battle,” Askren quipped. 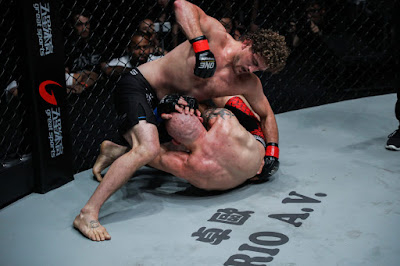 Known by his cage moniker “Tobikan Judan” or “The Grandmaster of Flying Submissions” due to his spectacular submission victories, Aoki is widely regarded as the most dominant lightweight in Asia for the better part of the last decade as he has had 47 professional bouts and strutted his wares in various promotions.
In addition, Aoki proudly owns black belts in both Judo and Brazilian Jiu-Jitsu, and has won an astonishing 25 of his 39 matches via submission.
Even with Aoki’s accomplishments and his dynamic grappling pedigree, which vastly contrasts from the American’s approach in the cage, Askren guaranteed that he will continue to employ his signature game plan of wrestling his opponent to the ground and using an impeccable top game to finish off his opposition.
“I said from day one that I am the best in the world at what I do, and this is what I am going to do every single time. I have been saying that since I started in 2009, and I believe it more strongly than ever because I have proved it 17 times now, and I am pumped to prove it again,” he stated.
Askren maintained that he has no intentions of giving up his gold-plated strap to Aoki as he collides with the Japanese submission wizard at ONE: IMMORTAL PURSUIT.
“He’s going to stick around until I put him out,” the undefeated ONE Welterweight World Champion declared with confidence.
​
​For more updates on ONE Championship, please visit www.onefc.com, follow us on Twitter and Instagram @ONEChampionship, and like us on Facebook at https://www.facebook.com/ONEChampionship.
About ONE Championship™
ONE Championship is the largest global sports media property in Asian history. Headquartered in Singapore, ONE Championship is the home of martial arts. The world’s most exciting martial arts organization hosts the largest sports entertainment events across Asia, featuring some of the world's best martial artists and world champions, all signed to exclusive contracts, on the largest media broadcast in Asia. In addition to its digital platforms, ONE Championship broadcasts to over 1 billion potential viewers across 128+ countries around the world with some of the largest global broadcasters, including Fox Sports, ABS-CBN, Astro, ClaroSports, Bandsports, Startimes, Premier Sports, Thairath TV, Skynet, Mediacorp, OSN, and more.