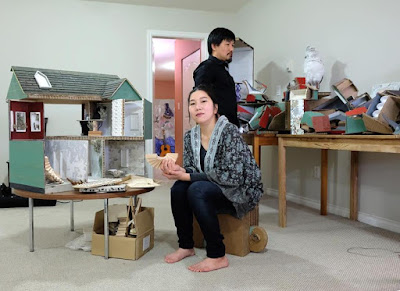 In their recent exhibit at Galleria Duemila, Jay Ticar and Amy Aragon works on paintings that connect to the visual roots of sound art. The Vancouver-based artist couple articulates their response to this global interest through painterly abstractions and their ongoing theme of home.
Informed by ideas obtained through The 2017 Asia Center Fellowship held in 3 countries, the artists devised a creative structure that proposes a conversation on the non-musical aspect of sound art. They constructed house-like architectural models that are processed through the ideas of fragmentation and painting. This is to relate to abstraction and conceptualism as sound art fundamentals.

Some of the works will be the following:

“Place of Sonority: On full view at Galleria Duemila, the latest works of Jay Ticar and Amy Aragon are spellbinding visual constructs emanating from the nooks and crannies of an imagination latched on an archetypal locality. This archetype of the home has been chosen as an endearing topic of the artists for more than two decades. Home is the residence from which metaphors of domestic wakefulness begin and to where areas of the unconsciousness find momentary berth. 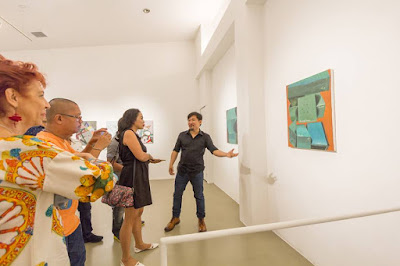 “Clues From The Past: We can find clues more than 10 years ago. To fathom where we can see Jay Ticar and Amy Aragon’s “Sounds Like Home” exhibition as their latest art evolution, let’s backtrack circa 2007. Jay assembled “Frangible Armor Piercing Inside A Single Round Bold Action Bull Barrel” installation work in Mag:Net Katipunan to reimagine the fragmentary explosion occurring inside a barrel chamber of a gun. Using hundreds of wooden arrows and colored feathers as if flinging to space, secured by strings attached on the ceiling and gallery walls, this work captured in freeze frame the splintering blast that also fill one’s sense of peril. The Ticar-Aragon art duo produced decades ago oil paintings in large formats portraits and sceneries fragmented by simulated broken glass reflections that dissect the pictorial plane in quasi-Cubist fashion. Then there’s this series of photos in blogspot.com documenting Jay performing an art action in Japan entitled “School Yard Fight AK.A. Vision After Vision” (2005). In this performance piece, Jay, donning only a pair of shorts used his entire body to wrestle with a paint-drenched canvas lying on a ground clearing in the middle of a forest, rolled with it and breaking its wood frame in the process. With upper torso and limbs smudged with wet pigment, Jay strode off the scene back to a well-lit building leaving a brood of students playing violin.” — Raul G. Rodriguez 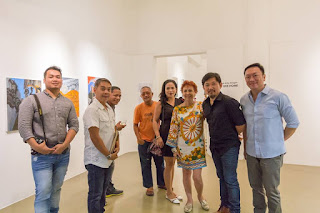 Jay Ticar and Amy Aragon has been exhibiting individually and as a tandem in respected venues and events of art here and abroad. After The University of the Philippines, Jay finished MFA at Tama Art University in Tokyo as Monbukagakusho scholar and Amy finished her post graduate program at Seneca College in Toronto. The couple is a combination of individual citations for their artistic practice. This includes being featured in publications, being Ateneo Art Awards finalists, and being recipient of Asian Public Intellectual Fellowship Awards to name a few.