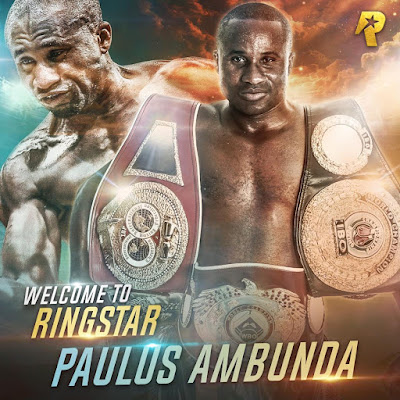 The three-time IBO world champion Ambunda, who was also a former WBO World Bantamweight champion, says, “I am happy to sign with Ringstar Management, and I look forward to my upcoming fights, under the Ringstar banner.”

Scott Farrell, Founder & CEO of Ringstar Boxing, which is now referred to by many as Asia’s number one boxing sports property, says, “I am very excited to welcome Paulus “The Rock” Ambunda, to Ringstar Management. He still has plenty to offer and he proved that on my last show at Marina Bay Sands on September 29th, when he once again claimed the IBO super bantamweight title. I will be taking Paulus to bigger fights and he will once again shock the world, mark my words.”

Ringstar’s recent campaign has also been shortlisted for the Best Integrated Marketing Campaign for a Sports Event category, at the prestigious SPIA Asia - Sports Industry Awards, which recognizes the best work in the sports industry, across 47 countries.

Ringstar Boxing, Asia’s number one boxing sports media property has now reached an overwhelming broadcast footprint of over a potential billion viewers across the globe, plus broadcast partners that include FIGHT SPORTS, ESPN TV5 Philippines, MediaCorp Okto, Astro Malaysia, and FTA channel for delayed broadcast.
Please visit www.fightsports.tv for more information.
***
Get the latest announcements at FB/Ringstar and follow us at www.facebook.com/ringstarboxing and on Twitter and Instagram at @ringstarboxing.
Posted by Boy Raket at 5:00 PM