70,000 Breads & Other Food Given by Quezon City’s Oldest Bakery in #WorldPandesalDay 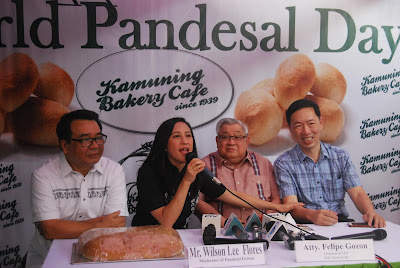 Despite a February 6 fire from a neighboring resto bar which burned down Quezon City’s pioneer and award-winning 79-year-old Kamuning Bakery Café, its owner Wilson Lee Flores, staff and bakers are still optimistic.He is not discouraged, because he said he has overcome many other past crises ever since the death of his father when he was only seven years old and he had also witnessed his late teacher mother’s strong faith.

Wilson Lee Flores is a writer, teacher and realty entrepreneur who bought and revived Kamuning Bakery in 2014 due to his passion for history and good food.

Wilson Lee Flores said he accepted the Manuel L. Quezon GawadParangal Award in behalf of his late parents who died when he was young but who inspired him, his supportive younger sister Marilou F. So, his loyal and hardworking staff and bakers. 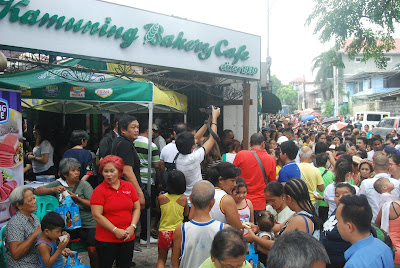 On October 28 Sunday 8 a.m., the public is also invited to a free medical, dental and optical mission at Kamuning Bakery Café in cooperation with Chinese General Hospital led by its CEO Dr. James G. Dy.

These Oct. 16 and Oct. 28 events are the last two events to be held here, before Kamuning Bakery Café’s burnt ruins shall be totally demolished, except for two surviving pugonbrick ovens which shall be retained for heritage preservation during its reconstruction.

With hashtag #WorldPandesalDay, this is a unique socio-civic and cultural endeavor to highlight the importance of the Philippines’ humble yet popular pandesal bread, to underscore the importance of all people helping solve the age-old problem of hunger.

Wilson Lee Flores said an inspiration for World Pandesal Day is the Bible story of a poor boy who gave 5 loaves of bread and 2 fishes, which faith in Godmultiplied to feed thousands.

As part of its non-traditional civic and cultural causes, Kamuning Bakery Cafe also hosts the tertulia-inspired and non-partisan “Pandesal Forum” for newsmakers and leaders to dialogue with media and intellectuals over meals of pandesal with other foods and coffee brewed from Benguet province arabica beans. Kamuning Bakery Café owner Wilson Lee Flores said: “In this liberal and informal Pandesal Forum which is part of this company’s unique CSR or corporate social responsibility, discussions focus on socio-economic, gut or “pandesal” issues affecting the people, and other topics. The pandesal is unique to the Philippines, loved by the masses, middle-class and by all, it symbolizes people’s simple happiness and wish for liberation from hunger.”

Kamuning Bakery Café is also the first Philippine bakery café to celebrate “World Poetry Day” every March 21, by inviting the public to send in original poems as payments for their coffee or tea. 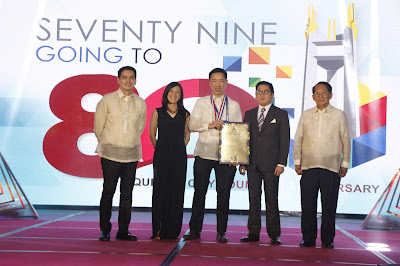 Ever since Wilson Lee Flores took over and revived Kamuning Bakery Café, it has championed diverse socio-civic, cultural, arts and other causes including the donation of four public schoolbuildings. The first public school was donated in the historic seaside town of Balangiga in Eastern Samar province. This fourth-class municipality was victim of cruel colonial war over a century ago from 1901 to 1902, with its stolen church bells still in the U.S.
Posted by Boy Raket at 4:30 PM