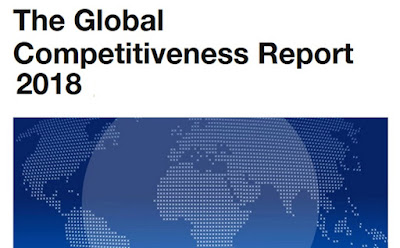 The Philippines’ (PH) ranking in the 2018 Global Competitiveness Report (GCR) significantly improved to 56th from 68th place in a report released recently by the World Economic Forum (WEF). The 2018 GCR covers 140 economies representing 99% of global GDP and 94% of world population. PH is one of the few countries which gained double digit increase in its ranking.

This year’s GCR adopted a new index called the Global Competitiveness Index 4.0 (GCI 4.0), which is a “composite indicator” with 98 indicators distributed across 12 pillars. GCI 4.0 derived its results from data providers such as the World Bank, WTO, IATA (air connectivity), ITC (for tariffs) and the Executive Opinion Survey administered by the World Economic Forum. The GCI 4.0 uses a “distance to frontier” approach in which performance is evaluated against the frontier of 100.

As the new GCI cannot be compared with the old index, WEF adjusted the 2017 results in order to provide a reference point, and released a 2017 “backcast edition.” PH’s performance improved as measured by its overall distance to frontier (DTF) score of 62.1 in the 2018 GCI versus 59.8 last year. PH posted improvements in all pillars and maintained its good macroeconomy stability performance with a DTF score of 90.

DTI Secretary Ramon Lopez noted the brand new methodology of the Global Competitiveness Index and supported the call for governments to address the factors that will fully capture the dynamics of the global economy in the Fourth Industrial Revolution, namely resilience, agility, human capital, and innovation.

"From day one, the Duterte Administration has worked on various reform initiatives to improve the country’s competitiveness. The recent positive performance in the refined GCI is a testament of the fruits of all of these reform initiatives, and we are gearing up for better. We are optimistic that with our ongoing reform initiatives with the enactment of the EODB/ Efficient Government Act, and efforts to promote government technology, the country will move us further closer to the frontier,” said Sec. Lopez.

The country also scored high on e-participation index (DTF: 93.82) under Pillar 1: Institutions. The e-participation index measures an economy’s use of online services to facilitate provision of information by governments to citizens (e-information sharing), interaction with stakeholders (e-consultation), and engagement in decision-making processes (e-decision making).

The trade chief also noted the relatively lower (DTF) scores across all countries when it comes to mastering the innovation process, from idea generation to product commercialization.

Sec. Lopez confirmed that recent government efforts point to this track through the Inclusive Innovation Industrial Strategy (i3S) as well as the Inclusive Filipinnovation & Entrepreneurship Roadmap. These will foster development in the country’s innovation and entrepreneurial ecosystem by strengthening the collaboration between academe/research community, industry, and government with focus on market-oriented research that would address societal problems and industry issues.

Through an MOU, DTI together with the departments of Science and Technology (DOST), Agriculture (DA), Information and Communications Technology (DICT), Education (DepEd), and the National Economic Development Authority (NEDA) and the Commission on Higher Education (CHED) committed to jointly implement the recommendations of the Filipinnovation Roadmap.
Posted by Boy Raket at 3:00 PM