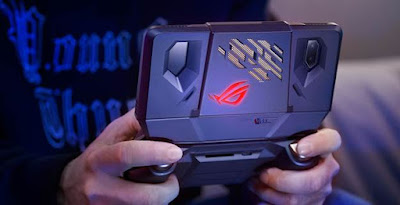 ASUS Republic of Gamers (ROG) finally debuted the much-awaited and critically-acclaimed gaming smartphone, the ASUS ROG Phone, taking the Electronic Sports and Gaming Summit (ESGS) main stage by storm with much fanfare from hardcore fans. Following its long-awaited Philippine launch, the hardcore gamers’ status symbol will be available for pre-order from October 28 – November 8, 2018 – with the choice to include the full array of its gameplay-enhancing accessories.
“The mobile gaming landscape in the country continues to expand aggressively, giving birth to numerous professional eSports teams dedicated solely to mobile gaming. We’ve supported this growth with ASUS’ mobile products that cater to mobile gamers, starting with the ZenFone Max Pro M1,” shared ASUS Philippines Country Manager George Su. “We take this support one step further with the ultimate gaming smartphone for hardcore mobile gamers, the ROG Phone; a testament to our tireless commitment to empower the local mobile eSports scene.”

Since its grand unveiling during Computex 2018 in Taiwan, the ROG Phone gained notoriety among media, fans, and supporters worldwide, ultimately becoming one of the most sought after smartphones of the year, with crowds from around the globe clamoring for more information on the device, as well as incessantly demanding for its official arrival in their local scene.
The ROG Phone is a game-changing 6-inch smartphone designed specifically for high-performance mobile gaming. With pure ROG gaming DNA at its core, the ROG Phone is the first and currently the only smartphone to be powered by the world's fastest speed-binned 2.96GHz octa-core Qualcomm™ Snapdragon™ 845 Mobile Platform with gaming-optimized Qualcomm™ Adreno™ 630 GPU.
WHERE RIVALS FEAR TO TREAD
The ROG Phone breaks every rule to go where rivals fear to tread–its unique GameCool vapor-chamber cooling system — with detachable AeroActive Cooler for an extra cooling boost — sustains blur-free high frame rates in the heat of battle, while its no-compromise Full HD+ AMOLED display blends a blazing 90Hz refresh rate and 1ms response time with gorgeous HDR visuals.
The ultra-comfortable design of ROG Phone includes unique side-mounted ports, and the enhanced, ultra-responsive game controls — including two programmable ultrasonic AirTriggers and advanced force-feedback haptics — let gamers focus all their game, giving them the edge they need to win.
GEARED FOR ALL KINDS OF BATTLE
On its own, the ROG Phone alone is already an amazing smartphone for mobile gamers. It also goes above and beyond, with a wide array of accessories that make it an even more complete gaming platform.
Whether you fancy a dual-display mobile gaming rig, streaming your mobile games wirelessly to a 4K display, or a full desktop experience on your smartphone, ROG Phone has got you covered.

“We at ASUS ROG are proud of our gaming heritage as the No. 1 Gaming Brand worldwide and in the Philippines. Our expertise and innovations in gaming devices for the past 12 years have given us the advantage of knowing what our gamers need, where they need it. With the ROG Phone, we take our support for our gamer fans to the next level as we culminate our gaming leadership into a handheld device that embodies the lifestyle of the uncompromising on-the-go gamer,” added Su.
For further details, refer to the complete spec list below:

MARKET AVAILABILITY
The much-awaited and critically-acclaimed gaming smartphone, the ASUS ROG Phone, will officially hit the shelves on November 2018.
Official price list is found at the table below: