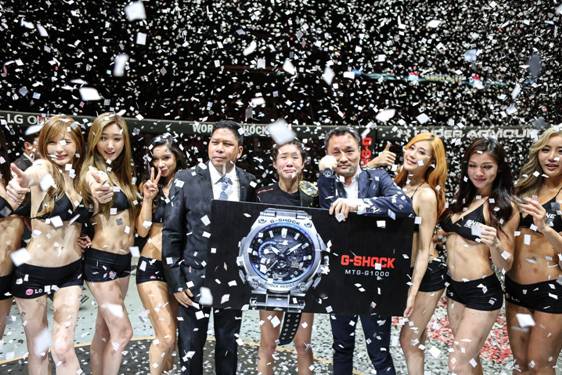 The largest sports media property in Asian history, ONE Championship™ (ONE), returned home to Singapore to the tune of 12,000 screaming Mixed Martial Arts (MMA) fans cheering loudly for their favorite ONE Championship superstars. ONE: ASCENT TO POWER electrified a capacity crowd with intense world-class MMA action from start to finish. In the main event, Angela Lee earned a hard-fought, five-round unanimous decision over spirited opponent Mei Yamaguchi to clinch the inaugural ONE Women’s Atomweight World Championship. In the co-main event, Roger Gracie put Michal Pasternak to sleep to earn the inaugural ONE Light Heavyweight World Championship.

Singapore’s “Unstoppable” Angela Lee overcame a spirited performance from Japanese MMA veteran Mei “V.V” Yamaguchi in the main event to clinch the inaugural ONE Women’s Atomweight World Championship. Lee and Yamaguchi showcased high-level, tactical grappling skills and exchanges of heavy blows all throughout the fight to the delight of a packed Singapore Indoor Stadium crowd. Yamaguchi started out very strong in the early going, but Lee came on late and scored points for multiple near-finishes. Throughout five gruelling rounds, Lee dug deep in the second half of the bout, doing just enough to earn the unanimous decision victory.

In the evening’s co-main event, Roger Gracie of the world-renowned Gracie fighting family of Brazil, dispatched previously-unbeaten opponent Michal Pasternak of Poland with ease, securing a deep arm-triangle choke to end the bout and claim the inaugural ONE Light Heavyweight World Championship. After a brief striking exchange, Gracie took Pasternak to the ground from the clinch. Pasternak tried his best to escape but within moments the choke was on and Pasternak was put to sleep.


In a highly-anticipated featherweight contest, former ONE Championship belt holders Narantungalag Jadambaa of Mongolia and Kotetsu Boku of Japan went to battle to the delight of the raucous crowd. Jadambaa showcased his complete arsenal of techniques by continuously staggering Boku with powerful strikes, while controlling his Japanese opponent with high-level wrestling. The fight-ending sequence came when Jadambaa was able to take Boku down to the mat, executing a crafty Von Flue choke to put Boku to sleep.

Singapore’s Christian “The Warrior” Lee continues his meteoric rise through the ranks with his fourth straight stoppage victory, turning in a sensational performance against the Philippines’ Cary “The Prince” Bullos to win by submission. Lee started off with his familiar unorthodox stance, peppering Bullos with sidekicks. When Bullos tried to close the gap, Lee took advantage by latching onto the Filipino’s neck. Within moments, Lee was able to drag Bullos to the ground, sinking in the D’Arce Choke to force the tap.

In a clash of colossal middleweights, Tatsuya Mizuno of Tokyo, Japan, stopped Egyptian Wushu champion Mohamed Ali in the second round of a scheduled three-round bout. After being on the defensive most of the fight, Mizuno found a way to handle Ali’s tremendous advantage in power to earn the victory. With Ali’s back against the cage, Mizuno delivered a couple of knees and finished off Ali with punches from the top, winning by technical knockout.

Hometown favorite Amir Khan of Singapore turned in a dominant performance, defeating Taiwan’s John “The Blade” Chang by technical knockout in the first round of a lightweight bout. Once Khan was able to take Chang down and gain full mount, the fight was soon over as Chang had no answer for Khan’s ground-and-pound.

Singapore’s Benedict Ang put in a workman-like effort, pummeling his opponent, Jimmy “The Silencer” Yabo of the Philippines, from the mounted crucifix position to force a verbal submission. Yabo tried his best to thwart Ang’s takedowns throughout the bout but was largely unsuccessful. In the third round, the 20-year-old Ang sealed the deal with a volley of unanswered punches to earn the stoppage.

Agilan “Alligator” Thani of Kuala Lumpur, Malaysia, wasted no time in working over Brad Robinson in the first bout of the evening at ONE: ASCENT TO POWER. Thani utilized well-placed high kicks and scored with takedowns before finishing the fight a few seconds before the first-round bell, courtesy of some powerful ground-and-pound.

Official results for ONE: ASCENT TO POWER

In case you missed the action log on to www.onefc.com/livestream for the full replay of the fights at only US $9.99.

ONE Championship is the largest sports media property in Asian history. Headquartered in Singapore, the world’s most exciting mixed martial arts organization hosts the largest sports entertainment events across Asia featuring the best Asian mixed martial artists and world champions, all signed to exclusive contracts, on the largest media broadcast in Asia. ONE Championship is broadcast to over 1 billion viewers across 75+ countries around the world with some of the largest global broadcasters, including FOX Sports, Setanta, MNC, Astro, Thairath TV, ABS-CBN, TV5, Physique TV, MYTV, HTV, Esporte Interativo and more.
Posted by Boy Raket at 1:37 PM