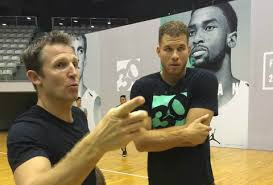 Due to insistent public demand the The Ganon Baker Basketball Camp Manila 2016 is now open to coaches in the pro and amateur categories. It can now also accommodate basketball athletes who are younger or older than its original 12-18 target age category.

Coach Eric Bañes, the official representative of the elite basketball trainer and skills specialist in the Philippines, said the change in the program was in response to requests from parents, athletes and coaches who want to avail of the once-in-a-lifetime experiece of being trained by Ganon Baker here in the Philippines.

The camp will be held from May 16 to 20 at the Ronac Center in San Juan City from 1 to 4 p.m., except on the last day when it will be held in the morning.

Baker, has worked closely with Kobe Bryant, LeBron James, Amar’e Stoudemire, Chris Paul, Deron Williams, Kyrie Irving, Kevin Durant and Vince Carter travels the world to conduct classes in camps similar to the one he will conduct in Manila for the very first time. He runs his Elev8 Sports Institute in Fort Lauderdale, Florida where American and foreign players, including individual athletes and teams from the Philippines, have gone for training. Baker has been credited for changing the game of teams and individual athletes and giving them a new, competitive edge.

“The cost of the trip, the tuition and the accommodations abroad is quite prohibitive for players and coaches who want to bring their game to a whole new level. Yet there are those who make the effort simply because they want to learn from the best. Now, Ganon Baker himself is coming to Manila so this camp is a rare opportunity that basketball coaches,  athletes and athletes’ parents want to take advantage of,” said Bañes, himself a certified skills coach and strength and conditioning specialist from the Ganon Baker school.

“Ganon inspires players to learn, perform and execute at the highest level. It’s amazing to see him demonstrate the drills and share his teaching methods. That’s why he is so effective as Nike Basketball’s lead instructor for skills training and development and was also connected with the Jordan brand camp. Campers learn all the right values and their physical skills and overall basketball IQ improve tremendously. He has very strong credibility in this game,” Bañes added.

A former varsity player at Duquesne and the University of North Carolina at Wilmington, Baker has a Master’s degree in physical education and health. He played professional basketball in Iceland after a brief stint as a Division I and II assistant coach. Baker, who has produced 42 best-selling DVDs on skills development, has also trained NBA and WNBA players such as James Harden, Jarryd Bayless, Tyson Chandler, Harrison Barnes, Grant Hill, Brandon Knight, Cleanthony Early, Johnny O’ Bryant, Scottie Wilbekin, Demya Walker, Angel McCoughtry, Natalie Novosel, among others.

Bañes is a product of several camps in the US, including the Steve Nash Skills Academy in New Jersey, the Joe Abunassar Impact Basketball Camp in Carson City, the Boston Celtics camp in Walsham, Massachusetts, the University of Connecticut strength and conditioning seminar, the Bobby Knight camp at Indiana and Achieve Fitness courses in Denver. Banes was the only Asian coach and class topnotcher in the Athletes Performance course in Tempe, Arizona.

Other coaches who will be involved in the Ganon Baker Camp are Mon Jose and Aries Dimaunahan. Several pro basketball players have already signed up to participate and will give younger participants the rare experience of training alongside experienced athletes. Amateur and pro coaches have also signed up t as observers at the camp. They will be given the opportunity to interact with Baker via question and answer sessions.