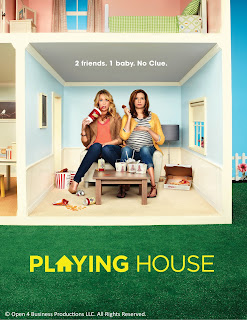 New comedy series Playing House revolves around the lives of two women who try to live their daily lives with one significant thing in common: a baby!

Emma Crawford and Maggie Caruso have been best friends since they were young. When Maggie finds out that her husband is cheating on her with another woman over the internet, she looks for Emma’s emotional support.  Emma leaves her budding career in China to be with her best friend. Together, they take care of Maggie’s newborn baby, Charlotte, while they deal with their own personal lives. Things get more interesting when Emma’s ex boyfriend, a cop, enters her life once more.

Emma and Maggie are played by real-life best friends Jessica St. Clair and Lennon Parham respectively. They also serve as creator and executive producers of the series. Playing House is originally aired by USA Network and showed its first episode in August 2014.

Playing House is joining Sony Channel’s roster of hilarious comedies, Superstore, Dr. Ken and Crowded in ROFLing Sundays, and will premiere on June 5, Sundays at 7:00pm on Sony Channel.

*This is Press Release
Posted by Boy Raket at 1:09 PM