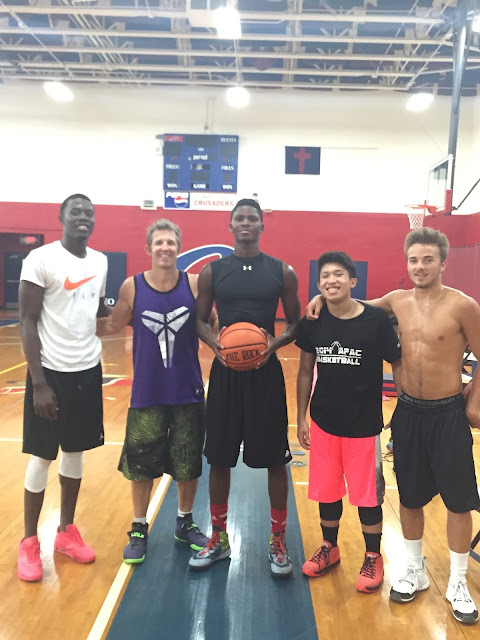 Innovative, cutting edge training and developmental techniques steeped in traditional core fundamentals. That’s the promise of the SKLZ Ganon Baker Basketball Camp Manila 2016 when it opens at the Ronac Center along Ortigas Avenue in Greenhills, San Juan on Monday, May 16.

The much-awaited training program of the elite basketball trainer and skills development coach is open to players of different age groups as well as coaches. Patterned after the courses taught at his Elev8 Sports Institute in Fort Lauderdale, Florida, Ganon Baker will be assisted in the five-day program by his local counterpart and Philippine representative, Eric Bañes, a certified skills coach and strength and conditioning specialist together with local coaches Mon Jose and Aries Dimaunahan.

The curriculum includes general concepts, workouts, drills and techniques like separation dribbling, shooting, counter moves and attacks. Participants can expect to learn specific “killer moves” like the Allen Iverson Killer Cross, the Tony Parker Combo, the Chris Paul Inside Out, the Derrick Rose Killer Crossover and the Dirk Nowitski Step Back, among others.

Baker arrived Saturday evening and will meet with groups and teams who seek training for their teams or individual players. Several PBA players and collegiate standouts have reportedly joined the camp to participate alongside young players who were the original target participants of the camp. The organizers have since extended the participation to even younger and older basketball players due to numerous requests from parents, coaches and athletes.

“We have received a lot of requests from players, parents and coaches to bring Ganon Baker to Manila. They know how much it costs to make the trip to Fort Lauderdale and enrol in Ganon’s school there. That’s why we really exerted effort to bring Ganon Baker here. Now that Ganon is in Manila, Filipino players and coaches have a golden opportunity to learn from him right here and save on all the costs and efforts to travel abroad,” Bañes said.

Baker has worked closely with Kobe Bryant, LeBron James, Amar’e Stoudemire, Chris Paul, Deron Williams, Kyrie Irving, Kevin Durant and Vince Carter and travels the world to conduct classes in camps similar to the one he will conduct in Manila for the very first time. Baker has been credited for changing the game of teams and individual athletes and giving them a new, competitive edge.

Besides SKLZ Philippines, the other partners of the event are Elite Performance Strength and Conditioning, Chris Sports, Molten, Jamba Juice and Vivere Hotel.