History Asia to Premiere TV Special “PRESIDENT OBAMA: IN HIS OWN WORDS” 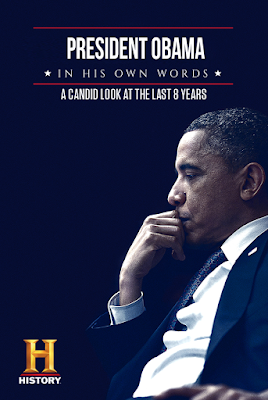 Encores:   16 Jan, Mon 11PM / 17 Jan, Tues 6AM / 17 Jan, Tues 1PM / 20 Jan, Fri 9PM/ 20 Jan, Fri 2AM / 21 Jan, Sat 3PM / on History
With the transition of power for the President of the United States of America to take place in a matter of days, HISTORY interrupts its regular programming to bring to Asia its two-hour TV special on the outgoing commander-in-chief, “President Obama: In His Own Words”.
Reflecting on his historic presidency; President Obama shares his thoughts on where the country was when he was elected, where it is now, and where he sees it going under his successor's command.

Comprising two interviews conducted before and after the 2016 Presidential election, “President Obama: In His Own Words” is the President's first-hand account of his time in office - his successes, his failures, his unfinished business - and what he hopes will be his legacy.

Also included are additional interviews with members of his staff including Vice President Joe Biden and Secretary of State John Kerry, Congress, and the press, to make for a unique examination of the Obama presidency from the inside out, and a profound and candid historical record that will stand for generations.

As the 44th President of the United States of America, Obama was the first African-American to be elected to the office. Among the work he will be remembered for, Obama signed into law various economic stimulus legislation; the contentious "Obamacare"; changes to domestic financial regulations; and enabled LGBT individuals to serve in the US Armed Forces. In foreign policy, Obama ended US military involvement in the Iraq War; signed the arms control treaty with Russia, ordered US military involvement against Muammar Gaddafi in Libya; and ordered the operation that killed Osama bin Laden.

During his second term, Obama promoted domestic gun control and called for greater inclusiveness for LGBT Americans. In foreign policy, Obama ordered US military intervention to ISIL; reduced US combat operations in Afghanistan; promoted discussions to the 2015 Paris Agreement on global climate change; brokered a nuclear deal with Iran; and normalized US relations with Cuba.
The outgoing President was the 2009 Nobel Peace Prize laureate for his efforts to promote nuclear non-proliferation and a fostering a new climate in international relations, especially in reaching out to the Muslim world.
HISTORY® is available on Sky Cable Ch 67; Cable Link Ch 43; Dream Satellite Ch 30; Destiny Cable Ch 57; and Cignal Ch 125. HISTORY HD™ is available on Sky Cable Ch 165.