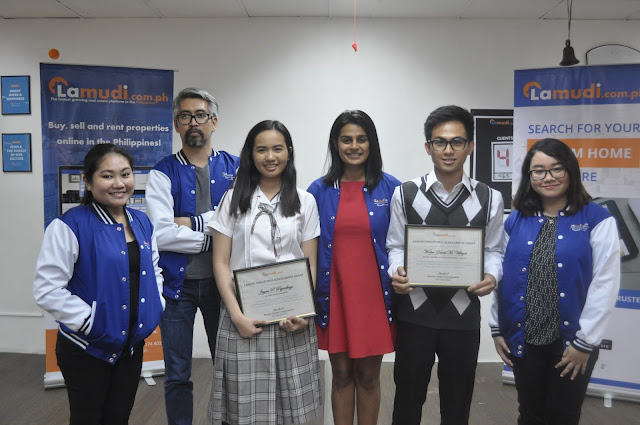 In a bid to contribute to the community and drive socioeconomic development, Lamudi Philippines launched a scholarship competition aiming to reward exemplary students. For its first foray, a student from Cavite and Pampanga bagged the scholarship grant for school year 2016–2017.

Walter David Villegas, a third-year Development Studies major at the University of the Philippines Manila, and Jaynie Pajarillaga, a third year communication student from Holy Angel University Pampanga bested more than a hundred applicants from different schools and universities across the Philippines.

Both scholars will receive Php20,000 educational assistance that will be given directly to the school to cover some of their tuition fees. The two will also be awarded with a paid internship in  any department at the Lamudi Philippines office.

“We saw in both Walter and Jaynie what we see in the Philippines: exceptional, talented, and determined, and by thoroughly reviewing their application documents and credentials we are very sure that we made the right choice,” shared Bhavna Shuresh, Lamudi Philippines and MyProperty.ph’s new Managing Director and CEO, who took the rein of leading the top local property portal brands in early 2017.

“Working in a tech company like Lamudi will be a great opportunity for the two students. The non-stop innovation and learning in the Lamudi office will surely be a good training ground for these budding and promising talents,” Ms. Shuresh added.

Though lacking resources such as electronic gadgets that can make his education much easier, Walter Villegas finds ways and has worked very hard to achieve a 1.33 GWA in the last semester. Walter, who lives in Dasmarinas, Cavite, and studies in UP Manila, has to travel up to three hours every day to get to school and with minimal cash allowance, but that does not hamper his determination to work hard and achieve good grades. Raised by a single mother (his father passed away in 2009), Walter believes that the Lamudi grant will definitely help him finish his studies and later bring genuine development to the world.

For Jaynie Pajarillaga, being an achiever is her way of giving back to her hard-working parents, a teacher and a driver. She never lets obstacles become a hindrance on her way to success. For her, will and determination are important, problems may arise but she believes that you have to learn to swim on your own. “I never forget my goal to continue being excellent despite all the obstacles that block my way, and because of that, I am still consistent in maintaining high grades,” Jaynie shared.

According to Lamudi Philippines, about 50 colleges and universities participated in this year’s scholarship program and more than 100 students sent in their applications. The company looks to expanding the program to cover more schools and students. Lamudi also announced that call for applications for the 2017–2018 academic year scholarship program will start sometime in March 2017.