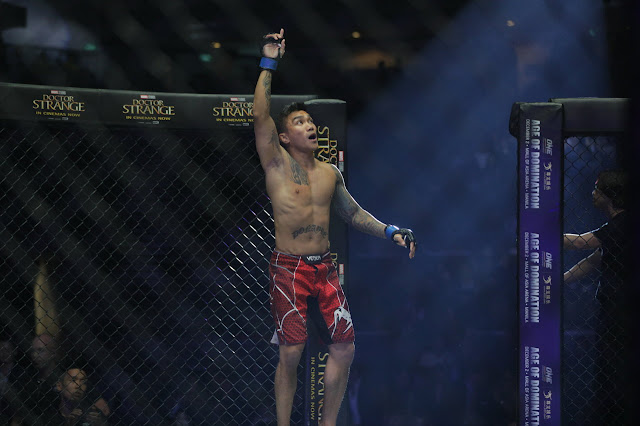 When Vaughn Donayre directed his career path to ONE Championship nearly three years ago, he was once touted as a promising Filipino talent from the beautiful province of Cebu.
However, the luster of his billing as a top-notch prospect slowly faded when a string of setbacks came his way.
The 37-year-old Cebu native suffered a first-round submission defeat at the hands of Emirati combatant Mohammed Walidin in his August 2014 promotional debut.
Donayre encountered the same fate in his second ONE Championship outing as he tasted a first-round stoppage loss to Malaysian superstar Peter Davis in October 2014.
It was followed by falling short in a thrilling lightweight showcase against former ONE Featherweight World Champion Honorio Banario last April.
A victory under the ONE Championship umbrella remained elusive for Donayre as he yielded to Singaporean sensation Amir Khan via third-round submission this past November.
Determined to break his four-fight losing skid in Asia's largest mixed martial arts organization, Donayre chose not to wallow over his recent defeat as he jumps right back into action by squaring off with Dutch-Indonesian kickboxer Vincent Latoel.
Both men are set to collide on the undercard of ONE: QUEST FOR POWER, which takes place at the Jakarta Convention Center in Jakarta, Indonesia on 14 January.
With the ambition to insert his name into the winner's column and regain his reputation as one of the Philippines’ best lightweight fighters, Donaire revealed that he asked ONE Championship’s top brass for an immediate return to the cage.
“It's not surprising that I have this fight. I asked for another fight immediately right after the bout against Amir Khan in November. Even if I win or lose, I will fight again anytime,” he said.
Donayre stressed that he finds himself in a must-win situation against Latoel, who seeks to break his two-fight losing skid at the expense of his Filipino foe.
“I need this win. I can’t lose forever. It feels like I’ve been losing forever already. But this is my chance to prove that there is a light at the end of tunnel. No one stays on the losing side,” he stated.
According to Donayre, losing is part of the sport. Even though winning has shied away from him in his last four fights in ONE Championship, he explained that his love for MMA keeps on luring him back.
“I am continuing my career as an MMA fighter because I love this sport. It keeps me alive. Moreover, this is what I live for. Setbacks don’t matter because I love what I do. That’s why I do it,” he shared.
As he faces a 36-fight veteran like Latoel, Donayre remains optimistic that he will have his raised in triumph for the first time on 14 January.
“I am motivated to win this fight. I want to secure my first win in ONE Championship. That’s my goal. It keeps me focused and driven for this fight,” he ended.

About ONE Championship™
ONE Championship is the largest sports media property in Asian history. Headquartered in Singapore, the world’s most exciting mixed martial arts organization hosts the largest sports entertainment events across Asia featuring the best Asian mixed martial artists and world champions, all signed to exclusive contracts, on the largest media broadcast in
Asia. ONE Championship is broadcast to over 1 billion viewers across 118+ countries around the world with some of the largest global broadcasters, including FOX Sports, Setanta, MNC, Astro, Thairath TV, ABS-CBN, TV5, MYTV, HTV, Esporte Interativo and more.
Posted by Boy Raket at 9:22 PM