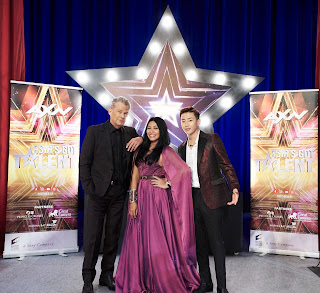 Sony Pictures Television (SPT) Networks, Asia announced today that celebrity judges David Foster, Anggun and Jay Park will return to the judges’ table for a sizzling third season of the record-breaking Asia’s Got Talent on its flagship channel, AXN. The dynamic trio have arrived in Singapore to start filming the series’ first five episodes.

“David, Anggun and Jay are a fantastic team and we’re delighted to welcome them back for season 3. Each judge brings a very different vibe to the show as they draw on their respective talents and vast industry experience to critique the acts,” said Virginia Lim, SVP and General Manager, SPT Networks, Asia. “The new season will be our most surprising yet, with a bigger variety of acts and incredible stories of dreams and determination.”

The Asia’s Got Talent casting team concluded its pan-regional open audition tour in July and has shortlisted over 150 colorful acts from 17 countries in Asia. The three judges will take the hot seats to help discover Asia’s next superstar.

Commenting on his return, David Foster, the 16-time Grammy award-winning producer said, “Asia remains my favorite part of the world for discovering new talent. The cultural diversity is truly breathtaking and I love seeing such a rich tapestry of acts making the stage their own. Asia’s Got Talent season three is going to be awesome. Every act knows what Anggun, Jay and I expect to see so I know the level of talent will be sky high this season.”

International recording star and World Music Award winner, Anggun, added, “As an Indonesia-born performer, I know what it takes to pursue a career in the performing arts. It’s an unwavering belief in your ability to succeed and a drive that gets you up every day to take the next step towards your dream. During the auditions, my heart is on stage with every single act, and I can’t wait to be inspired yet again by season three’s new generation of budding stars.”

Jay Park, the award-winning, multi-platinum recording artist and entrepreneur said, “I was so inspired and had so much fun last year that I wanted to come back and do it again alongside the great David Foster and lovely Anggun.”

Billed as the biggest talent competition in the world, Asia’s Got Talent features a variety of acts of any age and with any dream competing for the winning crown and a grand prize of USD100,000. Over 15 countries were represented in season two and were beamed into 46 million AXN households in 19 countries across the region. On social, Asia’s Got Talent content garnered over 310 million collective video views on Facebook and YouTube, making the show the region’s hottest entertainment series of the year.

Asia’s Got Talent is supported by regional sponsors Princess Cruises, the official cruise line of Asia’s Got Talent and Great Eastern, the market leader and a well-established trusted brand in Malaysia and Singapore.

The Got Talent franchise was created by Simon Cowell’s Syco Entertainment and is co-produced and owned by Syco Entertainment and FremantleMedia. It is entered in the Guinness World Records as the Most Successful Reality Television Format in history with 70 local versions produced across Europe, Asia Pacific, the Middle-East, Africa and the Americas. Around the world, the Got Talent format airs in a total of 186 countries.

Launched first in Asia in 1997, AXN is a global channel brand with a presence in Latin America, Africa and Europe. In Asia, the channel is enjoyed in 126 million households across 20 territories and is available in both SD and HD.