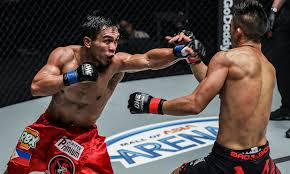 ONE Interim Bantamweight World Champion Kevin “The Silencer” Belingon of Baguio City, Philippines is scheduled to face reigning ONE Bantamweight World Champion Bibiano “The Flash” Fernandes of Brazil in a highly-anticipated bantamweight title unification bout at ONE: HEART OF THE LION, set for the Singapore Indoor Stadium on 9 November.
Before he takes to the ONE Championship cage in this epic World Champion vs. World Champion super-bout, Belingon talks about the announcement of the bout and his opponent Fernandes.
Ticket information for ONE: HEART OF THE LION is available at www.onefc.com.
Kevin Belingon, ONE Interim Bantamweight World Champion, stated:
“I am super excited. Finally the long wait is over, and now I’m fighting Bibiano Fernandes for the undisputed bantamweight title. Ever since the night I lost to him the first time in China, this moment has been all that I have looked forward to. Every opponent, every challenge that I have faced since then, has brought me here. This is what I have worked extremely hard for. I know that nothing will get easier, and I have to work twice as hard to prepare for the biggest bout of my life. This is a career-defining bout for me. I am laser focused on coming into this fight in the best shape ever, and I am working triple on my preparations.”
“I’m always motivated. After taking home the interim belt, I felt even more motivated because I knew I would be facing the champion soon. The Filipino fans have wanted this for so long, and it makes me happy that I can now give this to them. I feel strong and confident knowing I have their support. Coming to Singapore, I know it’s neutral ground, but I am grateful for every Filipino who shows their support. I am doing this for myself, and for the honor of my country. I will not leave anything to chance. I will take control of my destiny and I am definitely looking to finish this fight within the distance.”
“Bibiano [Fernandes] is an incredible champion. For so long I have looked up to him as a martial artist, and I have complete respect for him. But I have zeroed in on facing him. He has been on my mind for more than two years now. I have upgraded my skills where necessary. This time around, things will be different. I am a completely different fighter. I know the mistakes I made in the first bout. This is my chance to erase that memory. See you inside the cage Bibiano.”
ONE: HEART OF THE LION is scheduled for Friday, 9 November at the Singapore Indoor Stadium. The main event features a World Champion vs. World Champion super-bout as reigning ONE Women’s Strawweight World Champion “The Panda” Xiong Jing Nan of China defends her title against ONE Women’s Atomweight World Champion “Unstoppable” Angela Lee of Singapore.
For more updates on ONE Championship, please visit www.onefc.com, follow us on Twitter and Instagram @ONEChampionship, and like us on Facebook at https://www.facebook.com/ONEChampionship.
About ONE Championship™
ONE Championship is the largest global sports media property in Asian history. Headquartered in Singapore, ONE Championship is the home of martial arts and is the world's largest martial arts organization, hosting bouts across all styles of martial arts such as Muay Thai, Kickboxing, Karate, Kung Fu, Silat, Sanda, Lethwei, Mixed Martial Arts, Tae Kwon Do, Submission Grappling, and more. The world’s most exciting martial arts organization hosts the largest sports entertainment events across Asia, featuring some of the world's best martial artists and world champions, all signed to exclusive contracts, on the largest media broadcast in Asia. In addition to its digital platforms, ONE Championship broadcasts to over 1.7 billion potential viewers across 138 countries around the world with some of the largest global broadcasters, including Fox Sports, ABS-CBN, Astro, ClaroSports, Bandsports, Startimes, Premier Sports, Thairath TV, Skynet, Mediacorp, OSN, and more.