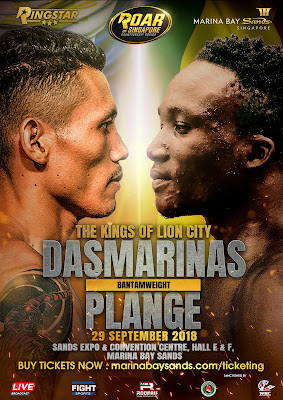 Filipino IBO World Bantamweight champion Michael “Gloves on Fire” Dasmarinas, is also keen to see action, as he faces undefeated boxer Manyo “Black Flash” Plange, of Ghana, who has a current record of 17-0.

The 26-year old Michael Dasmarinas who hails from Camarines Sur, currently has a record of 26-2, and is ranked number 1 by IBO, number 5 by WBC, and number 6 by IBF.  He also just completed his 3-week camp in Kashiwa, Japan, in preparation for his upcoming fight.

Dasmarinas had an impressive win against his previous opponent French boxer Karim Guerfi, last April 20, 2018, also in Singapore, when he won the IBO World Bantamweight title, winning via KO, 40 seconds into the 4th round, of what was supposed to be a 12-round fight.

(I am excited to fight again, I wish the fight were tomorrow already.  As a boxer, I am I’m training very hard for this next fight.  I’m training as hard as the last time, but now I want to prove myself even more as a boxer, specially now, that I have the IBO World Bantamweight belt with me.  To my fans, please keep on supporting me, and praying for our win.  To the Filipinos, specially those in Singapore, please come and support my fight.  I will make sure I would win for my country.)

Ringstar Founder Scott Farrell says, “Michael just keeps getting better and possesses that one punch knockout power, all his future opponents now fear. The name “Gloves on Fire” has more than one meaning, and he will surely set the Bantamweight division on fire with his power and determination to be world number one.”

As for the first Ringstar fight to take place at Marina Bay Sands, Farrell says, “As I said from my very first show, Marina Bay Sands is where Ringstar boxing will be. Now we are here, going live across the world from the Marina Bay Sands, on the 29th of September.  This is a gigantic leap for ‘The Roar of Singapore’, and I am very thankful to Marina Bay Sands for co-promoting this upcoming event with us.”

There will be a total of 9 fights for ‘Roar of Singapore V - The Kings of Lion City’.

Tickets are available at https://entertainment.marinabaysands.com/events/roar0918.  Ringside Seats are priced at SGD 192, while VVIP Seats with Personalized Waiter Service, Canapes and Beverage are at SGD 2,504.  While VIP Tables, which seats 8 persons, comes with a 3-course Dinner and Free Flow Beverage, are at SGD 4,032.  Doors open at 5 p.m., event starts at 5:30 p.m.

Sponsors and Partners of ‘Roar of Singapore V - The Kings of Lion City’, include NTUC Fairprice, Marina Bay Sands, Nutrifirst and Roomaif