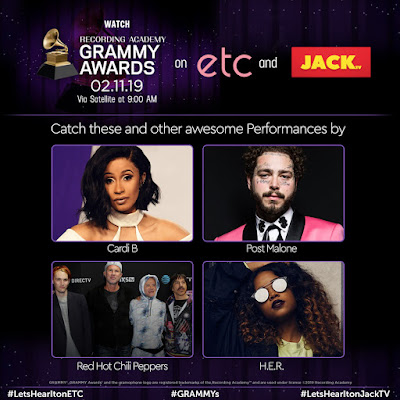 The Recording Academy™ and CBS have announced that 15-time GRAMMY® Award winner Alicia Keys will host the 61st Annual GRAMMY Awards®, marking her first time as master of ceremonies for Music's Biggest Night®. Taking place at STAPLES Center in Los Angeles, the GRAMMY Awards will be broadcast live via satellite at 9AM on Monday, February 11 (Manila time), on JackTV and ETC, with a primetime encore telecast at 7PM on JackTV and 8PM on ETC the same day.

"I know what it feels like to be on that stage, and I’m going to bring that vibe and energy," said Keys. "I'm so excited to be the master of ceremonies on the biggest night in music and celebrate the creativity, power and, magic. I'm especially excited for all the incredible women nominated this year! It's going "UP" on February 10!"

"A dynamic artist with the rare combination of groundbreaking talent and passion for her craft, Alicia Keys is the perfect choice as host for our show," said Neil Portnow, President/CEO of the Recording Academy. "Throughout her exciting career, I have watched her become a powerful force within the music industry and beyond. As an artist who speaks to the power of music, we are thrilled to have her on board for what's sure to be an unforgettable GRAMMY Awards."

singer/songwriter/musician/producer, an accomplished actress, a New York Times best-selling author, a film/ television and Broadway producer, an entrepreneur, and a powerful force in the world of activism. Since the release of her monumental 2001 debut album, Songs In A Minor, Keys has sold more than 30 million records and built an unparalleled repertoire of hits and accomplishments. 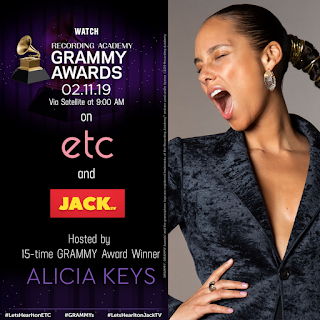 The 61st Annual Grammy Awards airs live via satellite at 9AM on JackTV & ETC with a prime-time encore the same day at 7PM on JackTV and 8PM on ETC.

Solar Entertainment Corporation is the largest content provider and channel operator in Southeast Asia. It is committed to elevating the network to a global standard and maintaining Solar as a leader and innovator in the industry. Until today, Solar continues to widen its programming to meet the demands of emerging audiences. For more details, log on to http://solarentertainmentcorp.com/.

JackTV is a one of a kind channel, showcasing a youthfully characterized and urban cultured TV entertainment that plays as an inspiration to young adults and young at hearts who revel in their individuality and uniqueness. Its target market sees the world as its playground. They express themselves through music, arts, and other creative ways. JackTV wants to harness and associate creativity with its brand by showcasing content that is relevant to this type of market. It is designed to make us feel comfortable, encouraging us to let go of our suspicions and tap into our playful side.

ETC, the number one free-to-air female entertainment network, is an interactive platform where ladies of all ages can freely share and express who they truly are and who they aspire to be. It is a channel that not only embraces but also celebrates everything that a woman value; from beauty and style, to her interests, passions and relationships. With world class shows paired with its own local content, ETC is sure to deliver the latest trends in the world of TV, fashion, beauty, lifestyle, and Hollywood news tailor made for the fun and stylish Filipina today.
Posted by Boy Raket at 1:00 PM