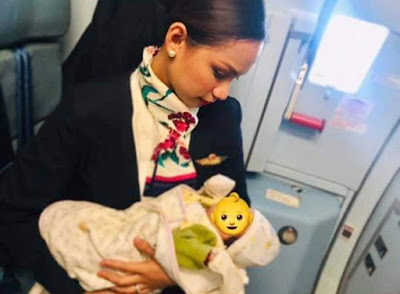 In a one-on-one interview with World Vision, Organo recounted that she never had any second thoughts about it when she heard the baby crying. "Soon after takeoff, narinig namin yung iyak ng bata. Makikita mo talaga na pagod na siya sa kakaiyak. Bilang nanay din ako, alam ko ang iyak ng bata kapag inaantok siya o nagugutom (we all heard the baby crying. Anyone can see that the child is already tired from crying. As a mom, I know when a baby cries out of sleepiness or hunger)."

When the child’s mother confirmed that she ran out of infant formula, Organo first considered expressing her breastmilk, but she knew that it would take some time. So, with the permission of PAL’s line administrator and the child’s mother, Organo breastfed the infant at the plane’s galley. Organo added that the child instantly gave signals of latching as soon as the child sat on her lap. “I saw the mother’s relief when the baby stopped crying and fell asleep.” Organo considers that particular flight a special one because it was a qualifying flight for promotion and she was able to help a passenger’s child through the gift of breastmilk.

Organo admitted that it was not the first time she wet-nursed a child. “I also once wet-nursed the kid of my neighbor.” Wet-nursing is when a child breastfeeds from another woman when his/her own mother do not have the capacity to do so. The World Health Organization (WHO) and the Department of Health (DOH) recommend wet-nursing when breastfeeding and breastmilk expression are not possible. 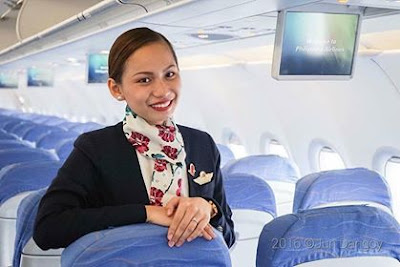 Breastfeeding in the Workplace is Possible

Organo shared that her own breastfeeding journey has not been a walk in the park, but the fulfillment, joy, and rewards of breastfeeding truly outweigh any struggle she had to endure.

It is worth noting here that a mother's breastfeeding experience can be made a lot easier with a conducive environment and supportive people around her. Organo admitted that she never had second thoughts of breastfeeding her child prior to giving birth. Her husband’s encouragement also gave her the confidence to breastfeed her daughter even when she doubted her ability to produce enough breastmilk.

During the flight when she breastfed the baby, Organo also shared that the support of her colleagues made it possible. “There were only two female extra crew members during that flight but I never felt ashamed. (Usually after inflight service and I feel na kailangan ko nang magpump, I’ll ask permission para makapag pump ako sa private area ng plane. And they’d tell me, sige ma’am go ka lang (Usually after inflight service, I’d just ask permission if I can express milk for a while, and they’d tell me go ahead, ma’am).” Despite the demanding nature of a flight attendant’s job, her work environment still made it possible for her breastfeed her daughter even after maternity leave.
“Leaving my child after months of being together was so hard. There was guilt because I have to leave my daughter, but I see to it that I express breastmilk for her and bring it home every single day.  So, it is a big deal for moms like me that my workplace actually supports my decision to continue breastfeeding.” She also shared that the airlines has already set up a lactation station in one of their offices to support breastfeeding for ground employees.

As World Vision and the Department of Health implement the Mother-Baby Friendly Philippines (MBFP) project that aims to strengthen the implementation of breastfeeding laws, Patrisha Organo’s story proves that breastfeeding in the workplace is possible and doable.

Her story shows that a mother’s job is one heroic flight. No matter where they are, they only want the best for their children. Giving the best nourishment and protection through breastfeeding is the finest prelude to a child's bright future.

“Breastfeeding is the most natural way to feed your child. For breastfeeding and working moms out there, you are not alone. There’s plenty of us here breastfeeding our child, wanting the best for them. It is a commitment to your child. So, keep on going,” Organo ended.