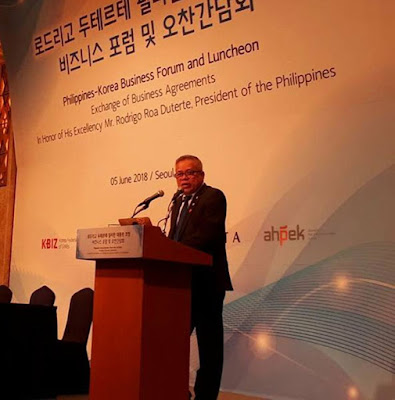 The Philippine (PH) business delegation and South Korean counterparts signed a total of USD 4.8B-worth of investment pledges and business expansion intentions during the PH-Republic of Korea (ROK) Luncheon and Business Forum on 5 June 2018. These agreements are estimated to generate 50,800 employment opportunities in the country.

The Department of Trade and Industry (DTI) led the event signing, which gathered over 400 business delegates from both countries and comprising of new operators as well as subsidiaries of conglomerates operating in the country.

DTI reported that the 22 signed business agreements-- six Memoranda of Understanding (MOUs) and 16 Letters of Intent (LOIs) -- were presented to President Rodrigo Duterte during his visit in South Korea.  These are in addition to the five MOUs signed between the governments of the Philippines and South Korea.

Hyundai Motor Co. (HMC) expressed its intention to participate in the PUJ modernization program by providing environmental-friendly automobile technologies. HMC proposed a mid-term and long-term investment plan to construct an assembly plant in the country for passenger vehicles.

Meanwhile, SK Energy and Services is keen on investing in LNG and power infrastructure development and operation, as well as LNG trading. The company is also looking expanding its business activity on city-gas distribution in the country.

POSCO Engineering & Construction Co. Ltd. intends to expand its operations in PH valued at USD 200 million and expected to generate over 2,000 jobs.

According to Sec. Lopez, the wide-range of business agreements also reflect small and medium enterprise (SME) assistance from South Korea.

Taeseong Kimchi Company expressed their plans to expand its kimchi food production in the country, which would open 20,000 employment opportunities. Further, the company will apply an inclusive business model that seeks to engage with local farmers from Benguet for its operations.

During the bilateral meeting between the two governments, discussions on the establishment of the Joint Commission for Trade and Economic Cooperation (JCTEC) were opened as well as the possibility of a Preferential Trade Agreement for the lowering of South Korean tariffs on PH agricultural products.

Both governments also agreed on furthering agricultural, science and technology, as well as security cooperation.

“The Philippine government is committed in widening its trade engagements with other nations under President Rodrigo Duterte’s independent foreign policy. With the South Korean business community as our partner, we are confident of making progress with government initiatives like the “Build, Build, Build” infrastructure program, and the thrust towards developing Micro, Small, and Medium Enterprises (MSMEs),” said Trade and Industry Secretary Ramon Lopez.

“Our next goal now is to ensure that these investment pledges and job opportunities will materialize, and allow us share the economic gains of the country, especially to those at the bottom of the pyramid,” Sec. Lopez added.

On the MOUs signed, the Philippine Chamber of Commerce and Industry (PCCI) and Philippines-Korea Economic Council (PHILKOREC) came up with an agreement with KBIZ for an exchange of information on commerce, industry, and trade opportunities focusing on small, medium enterprises. Likewise, PCCI inked an agreement with Korea Importers Association (KOIMA) for the promotion of trade, economic, scientific, technological cooperation, and other business relations.

In the field of die and mold industry, Philippine Die and Mold Association (PDMA) signed an MOU with Korea Association of Machinery Industry (KOAMI) to create a pool of manpower trained in die and mold designing, making, processing, assembly, and other related courses.

Meanwhile, South Korean’s DaeKyung Engineering Co., Ltd. sealed an MOU with Philippine Utility Vehicle Inc. (PhUV) for a joint development and promotion of green business in the country, as well as smart grid and electric vehicles. DaeKyung will also explore the co-development and co-assembly of the modern electric vehicle prototype by providing the powertrain and other parts.

*This is Press Release
Posted by Boy Raket at 1:00 PM