Venture Into the Quantum Realm with a Piip of a Button 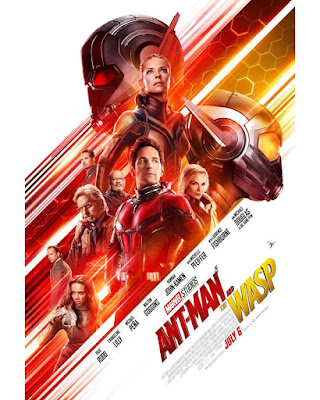 Much has been said about Marvel’s Avengers: Infinity War after it ended. People have been speculating, even formulating their own theories about the fate of their favorite superhero. And then there are those who are left thinking, where were the others like the infamous Hawkeye, Thor’s Valkyrie, Black Panther’s Nakiya, even the Ant-Man and the Wasp? Even Captain Marvel had her share of the silver screen through her insignia at the end.

Where could they have been during all those fights? Could Ant-Man and the Wasp be in the Quantum Realm? With Piip’s latest marvelous promo, Piipsters have an opportunity to see what Scott Lang and Hope van Dyne are up to for as low as Php 150.00 during the first screening day of the Ant-Man and the Wasp on July 4, 2018, 7:30PM, at the Gateway Cineplex, Gateway Mall, Araneta Center.

Download the app now to Piip It! Limited slots available, reserve yours now!
Adding to the long list of food and merchandise that is available in the mobile app, Piip adds this exclusive deal for its Piipsters. Below are the mechanics to join this promo:
MECHANICS:
1. Download Piip on Google Play Store or iOS Store, install and complete your profile details.
2. Locate the Ant-Man and Wasp Promo on Piip's Billboard.
3. Tap on the 'Piip It!' button to chat with our representative and reserve your tickets.
4. Come in green and get a chance to win a prize from Piip!

TO CLAIM YOUR RESERVED TICKETS:
1. Reserved tickets can be claimed starting June 30 to July 4 from 11:00AM to 8:00PM at the Piip booth located near the Gateway Cineplex area, 4th level Gateway Mall,
Araneta Center.
2. Please bring a valid ID and the mobile phone used to reserve the tickets for verification purposes. 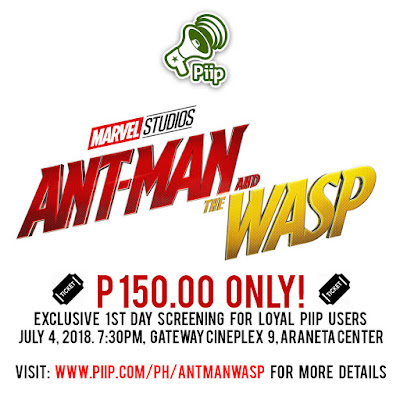 PROMO RULES:
1. One (1) Piip App user or download is only allowed to have 1 ticket. (i.e. 2 phones with Piip = 2 tickets)
2. Promo participants are required to have Piip app installed during event as part of the entry verification process and the pre-event games.

To know more about Piip’s latest promo, visit: http://024digital.com/clients/piip/antmanwasp/ .
Posted by Boy Raket at 9:00 AM