ONE CHAMPIONSHIP HOLDS KICK-OFF PRESS CONFERENCE FOR ONE: SPIRIT OF A WARRIOR 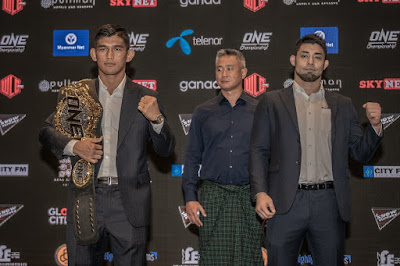 ONE Championship and telecommunications giant Telenor Myanmar recently announced a strategic partnership last February, which ensures the promotion is in pole position to deliver the most exciting rendition of authentic Asian martial arts to fans in Myanmar. The partnership aims to leverage ONE Championship and Telenor Myanmar’s capabilities to collaborate in the area of martial arts-related content, digital assets and services, events and telecommunication services.

Jack Lim, Chief Commercial Officer of ONE Championship, stated: “ONE Championship is committed to delivering a unique and authentic martial arts experience to fans in Myanmar. The atmosphere is always electric whenever we visit, due in large part to hometown hero Aung La N Sang, who is revered and respected by all martial arts in the country for his embodiment of supreme skill and warrior heart which is a characteristic of the people he represents. It is my privilege to be here to kick-off this amazing event. Join us as we go live around the world at ONE: SPIRIT OF A WARRIOR this 29 June!”

Yin Yin Htay, Chief Financial Officer of Telenor Myanmar, stated: “We are pleased to partner with ONE Championship for the Official Launch of the ONE Super App in Myanmar. With many users now consuming TV shows, movies and content on their mobile phones, it is a great move that ONE Championship is allowing users to access all ONE Championship content via the free ONE Supper App. Our network now covers 90 percent of the country’s population, providing the widest and biggest mobile network in the country with 3G, 4G and fastest data services. Telenor subscribers across Myanmar can look forward to perks such as exclusive or early access to content on the app, ticket discounts and money-can’t-buy experience VIP experiences at ONE Championship matches. This strengthened partnership is part of our commitment to enriching our customers’ digital lives, and we will continue delivering best experience to all our customers, wherever they live, till they are satisfied.”

Aung La N Sang, ONE Middleweight & Light Heavyweight World Champion, stated: “Everytime I perform in front of my people in Myanmar, my heart is full and my soul fulfilled. As the reigning ONE Middleweight & Light Heavyweight World Champion, I welcome all challengers. Those who want to come get it, come get it. But this belt is staying in Myanmar, and I will do everything in my power to protect our honor. This title means a lot to me and my fans, and to everyone who has supported me since day one. I will step onto the canvas this 29 June in the best shape of my career and claim victory once again in front of my friends and family back home.”

Ken Hasegawa, ONE World Title Challenger, stated: “My career inside the cage has brought me to the pinnacle of the sport, and now, to a world title shot in Asia’s largest martial arts organization. It is an honor to lend my talents to ONE Championship, and I will relish this opportunity to showcase my skills to the world and to make Japan proud. Taking on Aung La N Sang for the middleweight title, it’s not going to be easy. He is a tremendous competitor and an even greater champion. But I am confident of victory and that my hand will be raised as the new champion.”

Leandro Issa, ONE Athlete, stated: “It is an honor for me to showcase my skills in ONE Championship. As a martial artist, I believe in taking on the biggest challenges possible, as a test of mental and physical capacity. My next bout is just another opportunity for me to test myself and I will head into the match in optimal condition in order to put on a good performance. Roman Alvarez is no doubt a difficult opponent, but I am confident of victory.’

Roman Alvarez, ONE Athlete, stated: “I am very excited to make my ONE Championship debut. The organization is the biggest in the world of martial arts, and I know the competition here is fierce and every opponent will be extremely tough. Still, I am confident in my skills and believe that I have what it takes to achieve success in the promotion. Leandro Issa is a tough, battle-tested veteran and I have to be in prime condition in order to score the upset. But the great thing about martial arts is that anything can happen, and I feel my time is now. I can’t wait to show fans what I’ve got and shock the world.”

Elliot Compton, ONE Athlete, stated: “I am excited about another great matchup with ONE Championship. It’s an honor for me to be fighting with a great promotion that shares my passion and devotion to martial arts. Matthew Semper is a very tough opponent and possesses a lot of power in all areas of his game. He’s aggressive and always determined to win. This is a great opportunity for me to showcase my skills. I can’t wait to see the beautiful country of Myanmar and put on an exciting, explosive, and dynamic display of combat for the fans in the arena and those watching live around the world through the ONE Super App. I’ve put in countless hours of hard work for this fight and have had a full training camp. I will come into this contest the fittest, strongest, fastest and most focused I have ever been! The fans can expect fireworks and a fight of the night performance. I’m hungrier than ever!”

Matthew Semper, ONE Athlete, stated: “I have total respect for my opponent, Elliot Compton. We have never trained together, but we have many friends and training partners in common. I think this is going to be a great matchup for us and I believe this Muay Thai bout inside the ONE Championship cage will be extraordinary. We have both put time in the game and it's a good win on both records in my eyes. I am honored to be making my ONE debut in Yangon, in front of some of the greatest martial arts fans in the world, and I can't wait to showcase my skills on 29 June.”