Game Nights Are On with the AXN Freedom Fridays Bar Tour 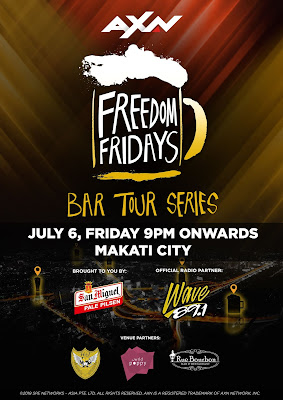 Get ready to break free and unwind with exciting games and surprises as AXN visits the best night spots in Manila featuring special guest star and TV host, Sydney Crespo.

AXN fans should bring their A-Game as they’ll be challenged in a series of fun activities and games to win awesome prizes.  Bar chow, drinks and AXN giveaways will be on tap.

“AXN is all about redefining action, so the Freedom Fridays Bar Tour will redefine your Friday night. It’s about getting together with friends, celebrating the end of the week and having fun responsibly,” said Armi Malaluan, Director and Business Head, AXN Networks Philippines.

So what better way to end a week of hard work than to play even harder? Mark your calendars - AXN Freedom Fridays kicks off this July 6, and continues over the next few weeks.

For more information, go to www.facebook.com/axnasia.

Launched first in Asia in 1997, AXN is a global channel brand with a presence in Latin America, Africa and Europe. In Asia, the channel is enjoyed in 126 million households across 19 territories and is available in both
SD and HD.