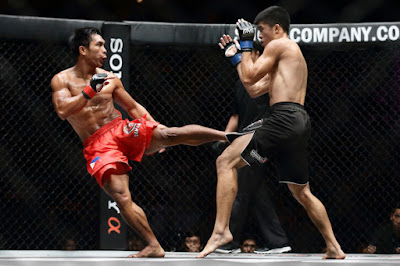 Chatri Sityodtong, Chairman and CEO of ONE Championship, stated: “With reigning bantamweight king Bibiano Fernandes not available until later this year due to injury, Kevin Belingon and Martin Nguyen will square off for the ONE Interim Bantamweight World Championship. It’s a great match-up between two heavy-handed power punchers, and one that will surely leave fans at the edge of their seats. Don’t miss ONE: REIGN OF KINGS when it hits Manila this July.”

Kevin Belingon, ONE Athlete, stated: “As one of the top bantamweights in ONE Championship, I am willing to take on all comers. It doesn’t matter to me who is the opponent. In fact, I am honored to face Martin Nguyen, a two-division world champion. If I can beat Martin, it would be huge. This is a great position I am in, and I am excited for this bout. It will be action-packed, for sure.”

Martin Nguyen, ONE Featherweight & Lightweight World Champion, stated: “Bibiano [Fernandes] should watch this fight with a close eye. He knows who the rightful challenger is. It's either me or Kevin, and I will be doing everything in my power to finish this one. This is a fan-friendly match-up between two aggressive, young beasts, and I can't wait to lock horns with Kevin. There will be fireworks.”

Kevin “The Silencer” Belingon of the famed Team Lakay in Baguio City, Philippines is one of the country’s most talented martial artists. With a professional record of 18-5, the Filipino wushu champion and former world title challenger is known as a fierce competitor with the ability to finish opponents in a variety of methods. The 30-year-old wushu stalwart owns eight huge knockouts on his resume, and is one of the most feared strikers in ONE Championship’s deep bantamweight division. In his last bout, Belingon overwhelmed former world title challenger Andrew Leone to win by scintillating second-round knockout. Belingon will now face Martin Nguyen for the ONE Interim Bantamweight World Championship.

Martin “The Situ-Asian” Nguyen is one of the most highly-regarded martial arts world champions. With an impressive 11-2 professional record, which includes three submissions and seven knockouts, Nguyen’s well-around skill set allows him to perform at the highest level of competition. 10 of Nguyen’s 11 wins have come by exciting finish. In November of 2017, Nguyen scored a scintillating knockout victory over the Philippines’ Eduard Folayang to become the first man in the history of ONE Championship to hold two world titles simultaneously in different weight divisions, reigning as both ONE Featherweight & Lightweight World Champion. In his last bout, the 29-year-old came away with a close split decision against rising star Christian Lee in a successful defense of his featherweight world title. Nguyen makes a quick turnaround to face Kevin Belingon for the ONE Interim Bantamweight World Championship.

Shannon “OneShin” Wiratchai of Bangkok, Thailand is one of the most thrilling offensive innovators in ONE Championship. The creator of the OneShin Striking System, Wiratchai developed his own martial arts style, which incorporates various elements from Muay Thai, boxing, wrestling, and Brazilian jiu-jitsu. Training out of Tiger Muay Thai and Bangkok Fight Lab, the 29-year-old has emerged as Thailand’s biggest and most exciting martial arts star. In his most recent contest, Wiratchai finished Rahul Raju with a quick 21-second one-punch knockout, and elevated his record to 9-2 (1 NC). Wiratchai will take on his biggest challenge yet when he faces the legendary Shinya Aoki.

Global martial arts veteran Shinya “Tobikan Judan” Aoki of Shizuoka, Japan is one of the world’s most decorated athletes. He is a DREAM Lightweight Champion, a Shooto Welterweight Champion, and former ONE Lightweight World Champion. The 35-year-old is a Brazilian jiu-jitsu black belt under the famed Yuki Nakai, and has won multiple grappling tournaments all over the world. Aoki also holds a black belt in judo, and is widely considered one of the best pure grapplers in martial arts today. He owns a professional record of 40-8 (1 NC), and has 25 submissions and three technical knockouts to his credit. In his most recent bout, Aoki finished Rasul Yakhyaev with a first-round triangle choke submission. Now, he looks to regain his status among the promotion’s top lightweights as he takes on rising star Shannon Wiratchai.

Brazilian jiu-jitsu legend Renzo Gracie of the famed Gracie family will resume his legendary mixed martial arts career in ONE Championship after eight years since his last professional bout. A former world champion with a 13-7 record, Gracie has faced the biggest names in the sport and is a skilled veteran with years of competition experience under his belt. He makes his way back into the spotlight for the last time to face the veteran Yuki Kondo.

Mixed martial arts veteran Yuki “Sora” Kondo of Japan has more than 100 professional bouts on his resume, lending his talents to famed Japanese mixed martial arts promotion Pancrase for the greater part of the last two decades. Beginning his professional career in 1996, Kondo has amassed an incredible 60-34-9 record, which includes 19 knockouts and 17 submissions. He makes his ONE Championship debut this July against the legendary Renzo Gracie.