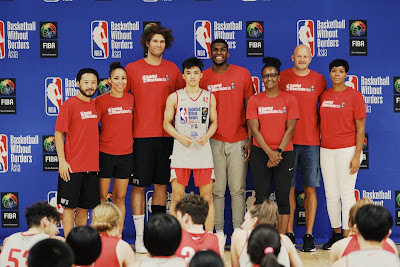 MANILA, PHILIPPINES, Aug. 17, 2019— The fourth and final day of Basketball without Borders (BWB) Asia 2019 in Tokyo, Japan concluded in thrilling fashion as the 64 campers from 18 countries and territories in Asia-Pacific competed in playoffs and championship games, a 3-point contest, and a pair of All-Star games, which featured Batang Gilas forward Joshua Rafael Lazaro, Jr. NBA Philippines All-Stars Harold Alarcon and Florence Jil Talas.

The camp got underway in the morning with playoffs games to determine the championship games matchup.  On the girls side, the New York Liberty and the Los Angeles Sparks faced off in the championship game, with the Liberty (coached by former WNBA player Ashley Battle) coming away with a 33 – 18 win.

The boys championship game then followed, with the Orlando Magic, coached on the sidelines by current NBA assistant coach Pat Delany, defeating the Minnesota Timberwolves 22 – 16.

Upon the conclusion of the championship games, the boys and girls competed in the 3-point competition finals.  Mustafa Rashed from Bahrain was crowned the boys 3-point champion, while Japan’s Miyu Ogita came out on top on the girls side.

Finally, the two boys and two girls All-Star teams were announced.  The West All-Stars pulled out a win for the girls (29 – 23), while the East All-Stars emerged victorious on the boys side with a 42 – 37 win that saw Alarcon emerge as the Boys All-Star Game MVP.

The 11th BWB Asia camp wrapped up with the Awards Ceremony.  Junseok Yeo (South Korea) was named Boys MVP, while Georgia Woolley from Australia was crowned as MVP on the girls side.

The following is a complete list of All-Star rosters and awards winners:

Girls Camp MVP: Georgia Woolley (Australia)
About the NBA
The NBA is a global sports and media business built around four professional sports leagues: the National Basketball Association, the Women’s National Basketball Association, the NBA G League and the NBA 2K League.  The NBA has established a major international presence with games and programming in 215 countries and territories in 50 languages, and merchandise for sale in more than 100,000 stores in 100 countries on six continents.  NBA rosters at the start of the 2018-19 season featured 108 international players from 42 countries and territories.  NBA Digital’s assets include NBA TV, NBA.com, the NBA App and NBA League Pass.  The NBA has created one of the largest social media communities in the world, with 1.6 billion likes and followers globally across all league, team, and player platforms.  Through NBA Cares, the league addresses important social issues by working with internationally recognized youth-serving organizations that support education, youth and family development, and health-related causes.
Posted by Boy Raket at 1:30 PM