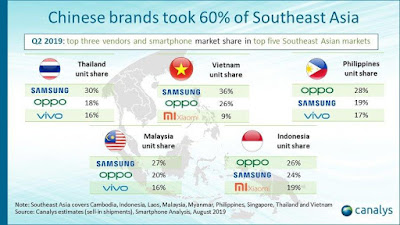 MANILA, PHILIPPINES, AUGUST 2019 - According to the report released by Canalys, OPPO is officially one of the smartphone brand leaders in the Philippines besting its known competitors in terms of market share. OPPO gained 28% of the share; while Samsung cornered a total of 19%; and Vivo earned 17% of the share for the second quarter of 2019.

The report also stated that SEA achieved the most growth in Asia, and Greater China. OPPO shipped 7.3 million units in Q2 of 2019 in SEA, close to Samsung’s 7.7 million units record.

“We are humbled by this achievement given that we just came into the country just 5 years ago. As innovation is at the core of the OPPO brand, we value the importance of being able to provide only the best smartphones that will enable the Filipinos to  move forward to achieve their goals. We promise that this is just the beginning as we’re fully committed to continue bringing the best smartphones we can offer to the Filipino people,” shared by Zen Han, OPPO Philippines Vice President for Channel Sales.

Recently, IHS Markit also released its list of the world’s top smartphone makers for the Q2 of 2019 where OPPO overtakes US-owned Apple to the 3rd spot joining the ranks of smartphone giants Samsung and Huawei which occupies the first and second spots respectively. OPPO is largely present in Asia, Europe, and Australia.

OPPO is a leading global smart device brand. Since launching its first smartphone -“Smiley Face” - in 2008, OPPO has been in relentless pursuit of the synergy of aesthetic satisfaction and innovative technology, Today, OPPO provides customers with a wide range of smart devices spearheaded by the Find and Reno series, ColorOS operating system, as well as internet services such as OPPO Cloud and OPPO+. OPPO operates in more than 40 countries and regions, with 6 research institutes and 4 R&D centers worldwide and an international design center in London, OPPO’s more than 40,000 employees are dedicated to creating a better life for customers around the world.
Posted by Boy Raket at 7:30 PM