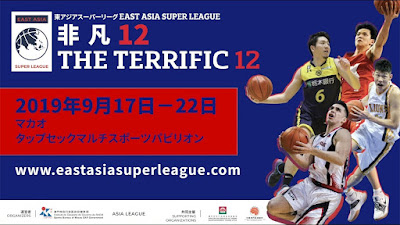 Now that San Miguel Beer has taken home the PBA Commissioner’s Cup Trophy from TNT, the two Finals protagonists will rekindle their rivalry in a foreign tournament in Macao come September. They will be joined by Blackwater Elite in a 12-team competition that will also include ball clubs from China, Japan and South Korea.

The participating teams in East Asia Super League, Asia’s premier basketball tournament include the Liaoning Flying Leopards, the Shenzhen Aviators, and the Zhejiang Guangsha Lions from China; the Chiba Jets, the Niigata Albirex, the Ryukyu Golden Kings and the Utsunomiya Brex from Japan; the Jeonju KCC Egis and the Seoul SK Knights from Korea and the three PBA teams.

The “Super League” started in Macao in 2017 with eight teams participating in Summer Super 8. Last year the number of teams grew to 12 and began to be known as the Terrific 12. where the Philippines was represented by a PBA D-League selection called the iECO Green Warriors. This year, the PBA’s top two teams and quarter finalist Blackwater Elite will add more punch to the Philippine representation.