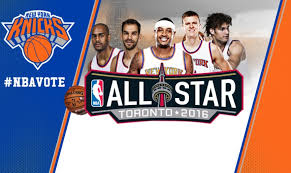 The National Basketball Association (NBA) and Verizon will tip off NBA All-Star Voting 2016 today at 2 p.m. ET.  The all-digital program gives fans everywhere the opportunity to vote for their favorite players as starters for NBA All-Star 2016 in Toronto, the first All-Star Game to be held outside of the U.S. in the event’s 65-year history.

New to the voting program this year, NBA fans are now able to cast their daily votes directly through Google Search on their desktop, tablet and mobile devices.  They can also vote on NBA.com, through the NBA App (available on Android and iOS), SMS text, and social media networks including Twitter, Facebook, and Instagram, as well as via Sina Weibo and Tencent Microblogs in China.

All current NBA players are available for selection.  Fans can select up to two guards and three frontcourt players from each conference when choosing starters via NBA.com or the NBA App.


Voting will conclude on Monday, Jan. 18, 2016 at 11:59:59 p.m. ET.  Starters will be announced live on TNT on Thursday, Jan. 21, during a special one-hour edition of TNT NBA Tip-Off presented by Autotrader.com at 7 p.m. ET, featuring Ernie Johnson, Charles Barkley, Shaquille O’Neal, and Kenny Smith.  The special will air prior to TNT’s exclusive doubleheader featuring the L.A. Clippers at the Cleveland Cavaliers (8 p.m. ET) and the San Antonio Spurs at the Phoenix Suns (10:30 p.m. ET).


Other balloting updates will be shared: